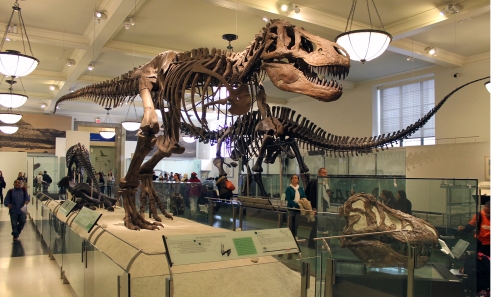 Tyrannosaurus rex in the Hall of Saurischian Dinosaurs at the American Museum of Natural History. Photo by the author.

Mounted fossil skeletons are ubiquitous in natural history museums, and have become an expected part of any exhibition of ancient life. Indeed, these displays are so pervasive that they are inextricably entwined with the public perception of both paleontology and museums. And yet, fossils do not come out of the ground bolted to armatures. Mounted skeletons incorporate actual fossils (or casts taken directly from them), but they are in equal measure human creations composed of steel, plaster, and fiberglass. They are installation art in the service of science, and what’s more, many of these displays have endured for decades, becoming valued cultural symbols in their own right.

Every fossil mount is the sum of the talents of a small army of scientists, artists, and engineers, and represents a fascinating interplay of conflicting functions. This page is meant to provide an introduction to viewing these amazing displays and their multifaceted identities with a critical eye. Note that most answers implicitly refer to dinosaurs, but generally apply to all fossil vertebrate mounts.

This is a growing document. Comments, corrections, and further questions are welcome!

It depends what you mean by “real.” Mounted fossil skeletons are real insofar as they are reconstructions of animals that actually existed, generally restored with the best scientific knowledge available. However, few mounts are entirely composed of original fossil bones.

The remains of dinosaurs, particularly large ones, are almost never found complete or intact. To build a complete mount, technicians usually have to fill in portions of the skeleton with bones (or casts of bones) from other individuals of the same species. Most mounts also include at least a few sculpted pieces, standing in for bones that have yet to be found. Sometimes museums display mounts made up entirely of casts, either to protect the original fossils or because they do not have any fossils from a particular popular species (a Tyrannosaurus rex, for example).

The Tyrannosaurus at the Philadelphia Academy of Natural Sciences is a cast of the original specimen in New York, above. Photo by the author.

2. What’s with all the casts? I want to see real fossils!

Some museums visitors are disappointed to learn that some (but far from all!) mounted skeletons of dinosaurs and other prehistoric animals are casts, rather than original fossils. There are three major reasons why casts are displayed. First, the demand for dinosaur exhibits far outstrips the number of fossil skeletons that have been found. Most dinosaur species are known from a single incomplete specimen, but casts allow that specimen to be enjoyed and studied in museums around the world.

Second, museums display casts because original fossils are extremely fragile, and mounted bones will inevitably suffer damage while on display. Fluctuating humidity, vibration from passing crowds, rusting armatures, and the strain caused by suspending fossils at unusual angles all take their toll, and some older mounts were in danger of catastrophic collapse before they were retired from public display. Museums replace deteriorating mounts with casts in order to preserve the irreplaceable original fossils.

Finally, mounted bones are largely inaccessible to scientists interested in studying them. Specimens can only be inspected when the museum is closed to the public, and some parts (like articulating surfaces of vertebrae or the back of the skull) cannot be seen at all. When a cast is used for display, researchers can continue to study the original bones and learn new things about prehistoric animals.

Most modern museum displays will tell you. Sculpted or casted bones may be painted a distinctive color, and replicas will be identified on the accompanying signs. However, some older displays, particularly those from the mid-20th century, are less forthcoming about what has been reconstructed.

In general, a skeleton standing freely, without any visible support bars or cables, is probably a cast. Note how the lightweight cast of Troodon below is supported only by rod extending from the left foot. In contrast, original fossil mounts, like the pictured Diplodocus, are held up by an array of braces, vertical bars, and cables to support the heavy bones. 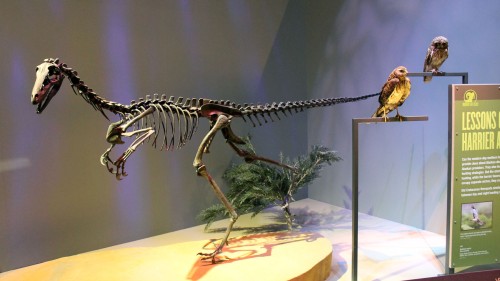 Troodon cast at the Perot Museum of Nature and Science. Photo by the author. 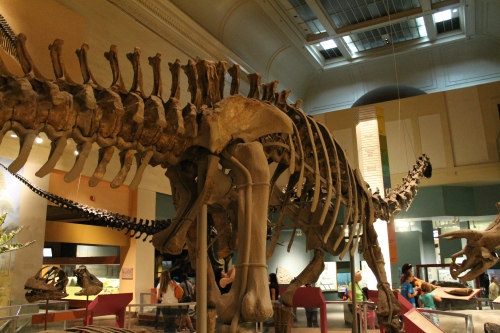 Diplodocus in the old National Museum of Natural History fossil hall. Photo by the author.

4. How can I tell if a mount is scientifically accurate?

For the most part, fossil mounts are rigorously researched reconstructions of extinct animals. However, some legacy mounts (see answer 5) are plagued by anatomical errors from a time when less was known about dinosaur biomechanics. A dragging tail is the most obvious sign of an older mount, but also look for awkwardly splayed forelimbs on ceratopsids (Triceratops and its relatives) and pronated hands (palms facing down) on theropods and prosauropods. Since older mounts are often composites of multiple specimens, many have mismatched bones from differently sized individuals.

Unfortunately, modern fossil mounts are not always perfect, either. Be on the lookout for overly stiff and linear vertebral columns, ribs protruding at right angles from the vertebrae, and overextended shoulders, elbows, and knees. On theropod mounts, the shoulder blades should be positioned so that the coracoids are nearly touching in the center of the chest.

This ice age camel at the Nebraska State Museum has a dramatic underbite because its jaw and skull came from differently-sized animals. Source

5. How can scientists reconstruct a complete skeleton from just a few bones?

Fossil mounts as we know them would not be possible without some amount of informed reconstruction, but this process isn’t just wild speculation. Reconstructions of extinct animals are very reasonable hypotheses based on a solid understanding of skeletal anatomy. As anatomist Georges Cuvier wrote in 1798:

Today comparative anatomy has reached such a point of perfection that, after inspecting a single bone, one can often determine the class, and sometimes even the genus of the animal to which it belonged…this is because the number, direction, and shape of the bones that compose each part of an animal’s body are always in a necessary relation to all the other parts, in such a way that – up to a point – one can infer the whole from any one of them and vice versa.

Cuvier’s principle of the correlation of parts – the idea that all backboned animals are built on the same basic body plan – is fundamental to the science of paleontology. If we have the right forelimb of an animal, we know that it had a mirror-image left forelimb. If we find a skeleton with it’s skull missing, we can still be confident that it had a head. What’s more, specialists can often recognize the group an animal belongs to (and sometimes the species) from just a few bones or teeth. Salamander vertebrae have a characteristic hourglass shape. Frog limb bones have “double-barreled” cavities in cross section. Marsupial teeth have a stylar shelf. New world monkeys have an extra premolar in each quadrant of the mouth. With enough specialized knowledge of related taxa, it is entirely possible to produce an educated reconstruction of most any animal from a minority of its skeleton. That said, an animal known from only a few bones is a poor candidate for a display mount. The specimens chosen for display are usually the most complete and informative examples available.

A selection of partially reconstructed skulls on display at AMNH. Photos by the author.

6. How are complete mounts built from incomplete skeletons?

Historically, technicians would create composites from multiple specimens, often resulting in disproportionate chimeras (see answer 4). The advent of 3-D scanning and printing technology has largely alleviated this problem. Mount-makers can now scan partial specimens, including those held at different museums, then print them at a consistent scale to create a complete mount. If part of the skeleton is missing (a left leg, for example), it is often possible to recreate it by making a mirror-image from the other side of the body. Still, some bones that have yet to be found must be sculpted by hand. Sculpted bones are not invented outright, but are based on those of close relatives, living and extinct. While a few sculpted elements on display are fairly crude, others have proven to be extremely accurate when the real bones were eventually discovered.

Rest assured, your museum is aware that its displays are obsolete and is seeking funding to modernize them. Unfortunately for today’s museum workers, early 20th century preparators typically intended for their fossil mounts to be permanent. Fossils were connected to steel armatures by drilling bolts directly into the them, and broken bones and visible sections of armature were hidden under layers of plaster, paint and shellac. In some cases, support rods were tunneled right through vertebrae or limb bones, then sealed in place with plaster and irreversible adhesives.

Coupled with the deterioration caused by decades on display (see answer 2), this all means that dismantling historic fossil mounts is an extremely difficult, time consuming, and expensive process. A single skeleton has more than 200 bones, each of which must be painstakingly decoupled from its armature, conserved, and stabilized. Plaster and adhesives must be chipped away by hand, a process made more harrowing by the fact that original fossil material is sometimes buried inside what appear at first to be sculpted bones. Detailed records of where the fossil ends and the reconstruction begins are often lost to time, if they were ever produced in the first place. Simply put, there are a lot of ways for a de-mounting project to go wrong, and it is better to wait for the resources to do the job properly than risk destroying irreplaceable fossils.

Historic dinosaur mounts at the Peabody Museum of Natural History. Photo by the author.

8. The renovation is going to take how long?!

Museums must close their popular fossil displays for years at a time in order to complete modernization projects. Disarticulating, conserving, and reconstructing a single historic skeletal mount is a multi-year process (see answer 7), and usually accounts for most of the time an exhibit is closed. Also consider that many museum buildings are themselves historic, and old halls need to be retrofitted, renovated, or restored. These spaces must be custom built to accommodate the weight of skeletal mounts, either by reinforcing the floor or by placing steel girders in the ceiling from which the mounts can be suspended.

Many mounted fossil skeletons in older museums have been on display for decades, and some mounts are over 100 years old. These legacy mounts were created in-house in every sense of the word. Museum paleontologists excavated the fossils, named and described the specimens, and eventually built the mounts in on-site machine shops. Some modern mounts are still created this way, but most major exhibits are now outsourced to private companies that specialize in this sort of work. Examples include Phil Fraley Productions, which mounted Sue the Tyrannosaurus at the Field Museum, and Research Casting International, which restored and remounted the Humboldt Musuem Brachiosaurus.

10. What was the first fossil mount ever built?

Near as I can tell, that would be the Megatherium constructed in 1795 by Juan Bautista Bru at Madrid’s Royal Cabinet of Natural History. Bru constructed this mount at a time when biological evolution was completely unknown, and naturalists were just beginning to wrap their heads around the concept of extinction. The Megatherium was a product of a very different era of human understanding about the natural world, but incredibily, this display has survived to the present day.

The first dinosaur mount was the Hadrosaurus Benjamin Waterhouse Hawkins assembled for the Philadelphia Academy of Natural Sciences in 1868.

One response to “Fossil Mount FAQs”