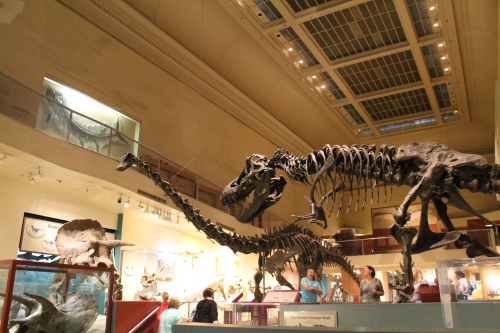 The dinosaurs at the National Museum of Natural History. Photo by the author.

Easily the best thing about living in the Washington, DC area is the plethora of free, public museums that make up the Smithsonian Institution. Tens of millions converge on the mall each year to this national center of learning, but for locals like myself, these museums are part of the backdrop of our lives. From field trips to rainy days to awkward first dates, the Smithsonian museums are an integral part of the DC experience. Still, I’d wager that I’ve spent more time at the museums than most residents, and the lion’s share of that time has been in the Paleobiology halls at the National Museum of Natural History.

When I was very young, my parents supported my interest in dinosaurs by taking me to the Museum at least monthly. Later, stopping at the Museum for a bit of quiet contemplation among the dinosaur mounts would prove irresistible whenever I was nearby. And over the course of two lengthy internships, I still occasionally took the long route across the Museum,  cutting through the Paleobiology hall to take another look at the abscess on the pelvis of the Camptosaurus, to check out something I’ve recently read about diplodocoid vertebrae for myself, or even to hear the all-too-familiar narration of the evolution of the horse one more time. In short, these galleries at NMNH have been and continue to be largely responsible for my life-long love of paleontology. They mean a lot to me.

It is no secret that NMNH has recently received a generous donation to renovate the Paleontology halls. The exhibits have changed incrementally over the course of my lifetime, including the remounting of at least three specimens and updated signage, but the exhibits are absolutely overdue for a major overhaul. In comparison to the NMNH’s new Ocean Hall and Hall of Human Origins, not to mention newer paleontology exhibits at peer institutions like CMNH and AMNH, the Paleobiology halls look quite tired. What’s more, the science of paleontology has exploded since the last major renovation in 1981, and there is tons of new information to cover.

It is an exciting time for the NMNH Paleobiology hall, but  looking into this exhibit’s past proves to be just as interesting. From the Smithsonian’s inheritance of fossils from government-funded expeditions of O.C. Marsh to the nationwide rush for dinosaur mounts in the early 20th century, to the dinosaur renaissance of the 1970s, the history of the Paleobiology hall mirrors the history of scientific and popular interest in prehistory over the past century. Many of the specimens in the hall have been on display longer than the NMNH building has existed, and seeing how their physical positioning and interpretation has changed over the years tells a fascinating story about the intersection of science, education and icons of American culture. In this series, I will attempt to tell that story as accurately as I can manage. Notable people and specimens will be introduced, and each iteration of the Paleobiology gallery will be explored.

Use this hub to explore the history of the NMNH Paleobiology halls. The following list will become links as the articles are completed.

History of Paleobiology at the Smithsonian

The Marsh Dinosaurs, Part I

Basilosaurus, Megaloceros, and Other Mammals

Brinkman, P.D. The Second Jurassic Dinosaur Rush: Museums and Paleontology in America at the Turn of the 20th Century. Chicago: University of Chicago Press, 2010.