The Gilmore Models: Where are they now?

Regular readers of this site (if there are any) undoubtedly know Charles Whitney Gilmore as the Smithsonian paleontologist who, between 1903 and 1964, led in the creation of most of the mounted dinosaur skeletons that remain on display at the National Museum of Natural History today. You don’t necessarily have to be in Washington, DC to see Gilmore’s reconstructions, however. In addition to being an expert anatomist and fossil preparator, Gilmore was a formidable sculptor, and during his tenure at the Smithsonian he produced a number of gorgeous life reconstructions of prehistoric animals. Plaster copies of these models were gifted or sold to large and small museums in North America and Europe, including the Sternberg Museum of Natural History, the University of Kansas Natural History Museum and the Hunterian Museum at the University of Glasgow. These models were typically displayed alongside isolated fossil elements to give a sense of the entire animal at institutions where complete mounts were unfeasible.

Charles Gilmore, or Chucky G, as he was known to his friends.

Unfortunately, many of the museums that acquired copies of Gilmore’s models in the 1920s and 30s seem to have lost the detailed provenance of these acquisitions (not a rare occurrence, as museums must track literally millions of objects and historic records on paper do not always survive). The Hunterian Museum has the best records regarding these models that I am aware of, and incidentally their online catalog is the source of most of the photographs in this post.

Stegosaurus model in plaster of paris. Image courtesy of the Hunterian Museum and Art Gallery.

While Gilmore’s models are obviously far from accurate by modern standards, a closer inspection reveals that Gilmore was familiar with every inch of the fossils in his care, and put that knowledge to use in his sculptures. The Stegosaurus above, for instance, is a perfect match for Gilmore’s full-sized mount in terms of pose and proportion. Undoubtedly, physically assembling an actual skeleton is among the best ways to become familiar with how an animal would work in three dimensions. In particular, note that unlike many contemporary reconstructions, Gilmore did not fudge the number or position of the plates; they’re all accounted for.

Triceratops model in plaster of paris. Image courtesy of the Hunterian Museum and Art Gallery.

The Triceratops model exhibits a number of interesting choices. The classic bowed ceratopsian forelimbs (which Gilmore first proposed after finding no other way to articulate them in his 1905 Triceratops mount) are clearly in evidence, but my eye is drawn to the scrawny, lizard-like hindlimbs. Comparing this model to Gilmore’s mount, there would appear to be virtually no muscle back there. The size of the head is yet another remnant of the mounting process. Since his Triceratops mount was a composite of numerous specimens, Gilmore used the skull of an inappropriately small animal, and apparently carried the chimeric proportions to this sculpture. The lack of cheeks and extremely thick neck are also characteristic of older ceratopsian reconstructions, although I can’t comment on precisely when or why that look went out of style.

Diplodocus model in plaster of paris. Image courtesy of the Hunterian Museum and Art Gallery.

This Diplodocus has a much more defined shape than most mid-century sauropod reconstructions. Note in particular the sloping back, which peaks at the sacrum. This differs from the 1907 Diplodocus mount at the Carnegie Museum of Natural History, which had a completely horizontal spinal column. When Gilmore led the creation of the Smithsonian Diplodocus mount, he had the opportunity to use a vertebral column that was found articulated in situ, and was thus able to more accurately portray the shape of the animal’s midsection.

Ceratosaurus. Image courtesy of the Hunterian Museum and Art Gallery.

Gilmore’s Ceratosaurus is the liveliest of the set, and is the only one that doesn’t strictly adhere to the pose of a corresponding fossil mount. Delivering a killing blow to a hapless ornithopod, one can easily imagine the energetic pounce that preceded this scene. I will point out, though, that this guy’s hindquarters are enormous. 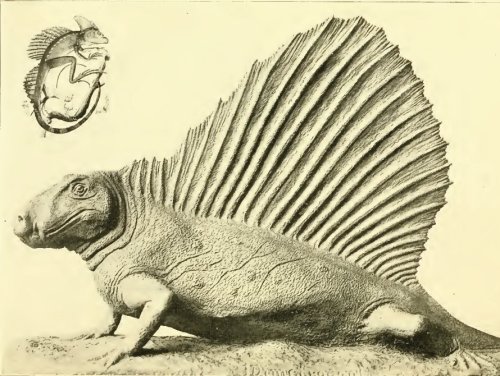 Gilmore also sculpted some non-dinosaurs, including at least one prehistoric horse and the Dimetrodon pictured above. Note the teensy stub of a tail, which this model actually shared with Gilmore’s mount of the pelycosaur. The lips obscuring most of the teeth except for a couple incisors is an unusual choice, and I’m not sure what inspired it. This image is from Gilmore’s 1939 paper on Dimetrodon, and the Basiliscus basiliscus in the corner provides a helpful comparison to a contemporary animal with a similar dorsal sail.

In addition to the models shown here, Gilmore created sculptures of “Anatosaurus”, “Brachyceratops” and a Cenozoic horse, as well as busts of Styracosaurus and Corythosaurus (and there may well have been others I haven’t seen). As mentioned, copies of these mounts were distributed to museums and possibly private collections throughout the 20s and 30s, and I have no idea how many were actually made. A few museums, such as the Sternberg Museum, actually have these models on display, but at other institutions they have been relegated to storage. Objects like these present an unusual challenge for collections managers. They were accessioned as scientific representations, but their value has shifted over the last century to the realm of art and history. While these models are undoubtedly important, they are probably no longer useful at many of the institutions that hold them. As such, the Gilmore models exemplify that museum collections are not necessarily static, but change in meaning as the years go by.

If you work at an institution that has one or more Gilmore models in its collection, feel free to leave a comment. I’d love to start a working database of where copies of these models have ended up!

Gilmore, C.W. (1939). “A Mounted Skeleton of Dimetrodon gigas in the United States National Museum, with Notes on the Skeletal Anatomy.” Proceedings of the US National Museum 56:2300:525-539.

8 responses to “The Gilmore Models: Where are they now?”