Freelance paleoartist, researcher and author Gregory Paul has recently issued what amounts to a Cease and Desist to illustrators making use of his skeletal restorations of dinosaurs in paid projects. Paul argues that when other artists use his reconstructions,”often but not always the result is that other’s work possesses the ‘Greg Paul look”, and that this is a violation of copyright which has hindered his ability to secure commissions. Paul’s statement can be seen here, with  rebuttals here, and here. I would also encourage reading the thoughtful responses to the issue by artists and others in the paleontological community on the DML archives.

Gregory Paul is of course one of the most influential individuals working on dinosaurs today. His work, particularly in Predatory Dinosaurs of the World, is probably the most frequently cited inspiration in my generation of paleophiles (perhaps because it isn’t cool to say Jurassic Park anymore). In particular, his series of intensively researched skeletal restorations (representing virtually every dinosaur known from sufficient material) are ubiquitous resources for paleontologists, and are a beloved resource among professional and hobbyist dinosaur artists. Even when his reconstructions are not directly utilized, the white-bones-on-black-outline presentation and one-foot-raised posture (see above) created by Paul have become an unofficial standard.

Now Paul is telling us that playtime is over. He has stated in no uncertain terms that creating dinosaur art based on his reconstructions without his consent and compensation is a copyright violation. The skeletal restorations require extensive research, travel to collections, original photography, and cross-scaling (which I won’t pretend to understand). Moreover, Paul has stated that other artists need to start doing the same, personally researching every dinosaur illustrated from the ground up, rather than relying disproportionately on his work.

I think Paul makes many fair points. In particular, the practice of producing uncredited Gregory Paul knockoffs at low prices is problematic, and his financial concerns are valid. Paul is in a (as far as I know) unique position among individuals producing quality paleontological restorations in that he does not have a university or museum position; his art is his business and livelihood, a fact which should be respected. 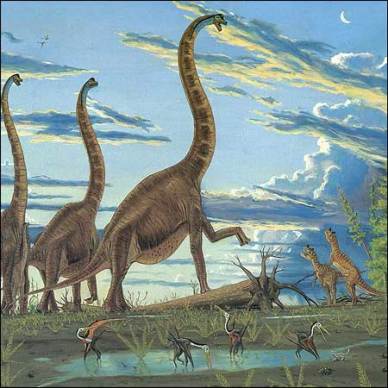 Giraffatitan and Ceratosaurus by Gregory Paul. Image borrowed from http://sodinossauros.blogspot.com.

Nevertheless, although I have complete sympathy for Paul’s predicament, I do have to take issue with some of his arguments, explained below.

1. I am concerned that Paul has framed the argument by defining paleoart as  a commercial commodity, and not as art or science. Everybody needs to make a living and romanticized ideals only get you so far, but science (and art) is all about sharing. By performing and publishing research, a scientist is providing her community and society with knowledge. Scientists continue to make new discoveries and continue to illustrate the many fascinating facets of the universe around us. As I see it, that is the point of science, but when you say, “this information that I discovered is mine, and only I can use it and built on it,” science becomes a business enterprise. We’ve already seen some of the complications of copyrighting genes. Do we really want to extend that to other fields? Paul’s situation is a little different because he is individually responsible for the majority of useful dinosaur skeletal restorations available. The principle, however, should be the same: when research is published, the knowledge gained from it becomes a shared commodity that others can learn from and expand on.

2. In his second rebuttal, Paul addresses the “slippery slope” that if skeletal drawings are off limits, than perhaps published photographs, measurements or even museum mounts could be as well. Paul argues that this is irrelevant because no scientist would object to others making use of their work when conducting further research. This seems like a completely inadequate excuse, because it gives Paul’s work special status that he is not extending to other researchers. The question remains that if one person objects to other scientists making use on their research, than what happens if others follow suit? The entire scientific process would grind to a halt.

3. Paul argues that he was key in establishing the “new look” of dinosaurs in the 1970s and 80s. What he means by “new look”, however, is not clear. Paul’s artwork and research was absolutely central in the transformation of our understanding of dinosaurs from slow, dim-witted monsters to active and socially complex animals (the work of Robert Bakker, John Ostrom, and, undeniably, the artists involved in Jurassic Park were also important). However, if Paul is attempting to claim some ownership of the fact that dinosaurs were, on the whole, fleet-footed and active animals, that seems as unreasonable as James Watson and Francis Crick claiming ownership of the fact that DNA is a double helix (oh wait…). If however, Paul is merely referring to the many artists who’s dinosaur depictions end up with the same emaciated, two-dimensional, dynamic-but-lifeless look of Paul’s, than this is a valid criticism. I hope to find clarification before jumping to conclusions about Paul trying to copyright scientific facts that he happens to have popularized. 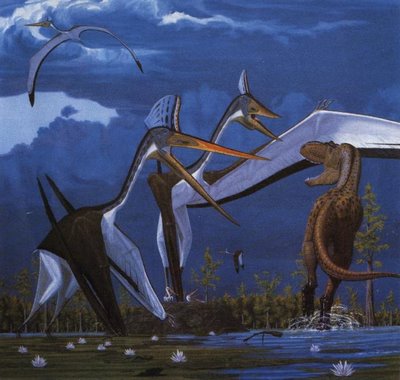 Quetzalcoatlus and Daspletosaurus by Gregory Paul. Image borrowed from http://blogevolved.blogspot.com.

Finally, I found what I interpreted to be an attempt to discourage up-and-coming paleoartists from joining the field to be extremely off-putting.

If you are thinking that gee wiz doing your own technical research and restorations sure sounds like a pain in the butt, or may be beyond your knowledge base, and you don’t want to risk doing inaccurate restorations or do not think paying me a fee is workable, then there is another alternative. Perhaps it is better if you do something else. I know, it’s lots of fun illustrating dinosaurs. But if you cannot produce high quality, original paleorestorations is it really a good idea to be in the business? If you for example like the Greg Paul look do you really want to be underbidding me? Does not make sense when you mull it over.

I read this as “this is my field, you will never be as good as me, so don’t even try.” Well gee wiz Mr. Paul, isn’t that a nice thing to say to the legions of fans and admirers whose image of you ranges from “brilliant” to “godly.” Yes, Paul’s work is excellent, and few can duplicate it’s quality, but it doesn’t seem especially constructive to actively discourage others from working in the field.

This is a difficult issue, particularly because the economic factors probably have to weigh more heavily than ideological ones. I hope Mr. Paul’s statement gets wide circulation, and continues to inspire debate on what we should value about science.