I Have Opinions About Dippy

Dippy the Diplodocus has been at London’s Natural History Museum since 1905. Source

Historic fossil mounts are usually taken for granted. Classics like the the AMNH Tyrannosaurus (which turns 100 this year!) have been enjoyed by generations of visitors, and it seems out of the question that they might ever be retired from display. Such was the case with Dippy the Diplodocus at London’s Natural History Museum – this cast of the CMNH original has been at the museum since 1905, and has been the centerpiece of Hintze Hall since 1979. It was therefore something of a shock when the NHM announced on Thursday that plans are afoot to replace Dippy with a blue whale skeleton. For a few hours, at least, this was huge news. #Savedippy was trending internationally, memes were created, and petitions sprang up to keep the mount in place. To me, it was inspiring to see how much people care about this mounted skeleton. I’ve repeatedly argued on this blog that fossil mounts take on second lives in museums, and have cultural and historical meaning independent of their identities as scientific specimens. The outpouring of love for Dippy is as clear an example as I could ever hope for.

Things seemed to calm down once a few editorials in favor of the change made the rounds, most notably pieces at the Huffington Post, the Conversation, and the Telegraph. These authors make a strong case for the blue whale: it’s the largest animal to ever exist, but it’s on the brink of extinction. It reminds us of our role as stewards of the planet, and the impacts the choices we make today will have on future generations. Meanwhile, the opposition hasn’t offered much beyond “kids like dinosaurs.” Personally, I’m not steadfastly opposed to the change. A whale is an excellent symbol for the importance of protecting the natural world, and it certainly beats losing exhibit space to a new cafe or gift shop. I’ve also never been to the NHM, and my heart already belongs to another Diplodocus, so I don’t really have a dog in this fight. Still, Dippy is an irreplaceable monument deeply entrenched in history, and certainly deserves a thoughtful defense. 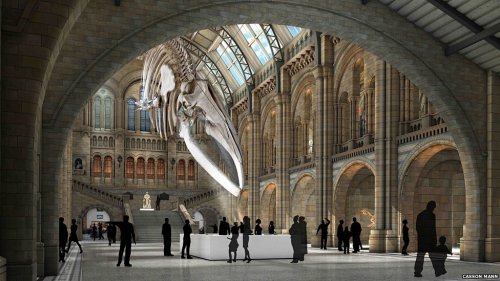 To review, the original Dippy fossils were collected in 1899 near Medicine Bow, Wyoming by a team funded by Andrew Carnegie. The Pittsburgh-based industrialist/philanthropist wanted to make a name for his newly-founded Carnegie Museum of Natural History by displaying the first-ever mounted skeleton of a sauropod dinosaur. The Diplodocus discovered by Carnegie’s team was (and still is) one of the most complete sauropod specimens ever found. Nevertheless, they lost the race to public display: the American Museum of Natural History unveiled its composite “Brontosaurus” mount in March of 1905*, while Carnegie was still waiting for his museum building to be finished. Not to be bested by the New York competition, Carnegie offered a complete plaster cast of the Diplodocus skeleton to King Edward VII. The replica now known as Dippy was on display in London before the end of the year. After completing a mount of the original fossils at CMNH in 1907, Carnegie went on to produce seven more Diplodocus casts, which he gifted to various European heads of state (read the full story here). In addition, at least four other Dippy replicas have been created since Carnegie’s death in 1919. Whether we consider all versions or just the London cast, Dippy the Diplodocus is among the most-viewed animal skeletons in the world. Its cultural impact, particularly in Europe, is astounding. More than any other specimen, it can be argued that this one made “dinosaur” a household word throughout the world.

*Natural history historian Ilja Nieuwland once commented that the first cast – the one still on display in London – was temporarily assembled in the Pittsburgh Exposition Society Hall in 1904. It could therefore be claimed that this was actually the first sauropod mount.

The Diplodocus cast in London debuted two years before the Pittsburgh original.

And yet, one of the recurring arguments to replace Dippy in the Hintze Hall is that it’s “just a copy” or worse, “a fake.” Of course, referring to a fossil cast in this way is a flagrant misrepresentation. Casts are exact replicas of real specimens, full stop. You can read about the reasons casts are made in the Fossil Mount FAQs, but suffice it to say that replicas like Dippy are just as useful to researchers as the originals they are based on in most respects – some have even been used for microscopic analysis. At the very least, it’s downright inflammatory to dismiss a cast as though it were a P.T. Barnum-era forgery.

But let’s say we don’t care about that, and we must adhere to a conception of authenticity that doesn’t allow for casts. Even then, this particular cast is a 109 year-old historic icon. Despite being made of plaster, this replica introduced the world to the immensity of deep time. Carnegie himself described it as way to foster international peace. It gave the multilingual troops in the first world war a shared word with which to refer to tanks. It was a harbinger of globalization and mass production. And yes, it has enchanted generation upon generation of schoolchildren. NHM director Michael Dixon said that the blue whale will bring the museum’s “societally relevant research” to the forefront, but you’d be hard-pressed to find a natural history specimen more societally relevant than Dippy.

Never let it be said that blue whales aren’t impressive. This model at AMNH is staggeringly huge. Photo by the author.

That brings me to the most irksome pro-whale argument. Michael Rundle contends that the whale “is “more profound than Dippy could ever be. We still share a planet, and a destiny, with this weightless behemoth.” It is true that blue whales are incredible, awe-inspiring animals, with a fate that depends directly on our own commitment to preservation. At the entrance to the NHM, the whale skeleton will be a powerful tool for educating audiences about the fragile condition of the world around us. But dinosaurs are just as relevant to ecological education. The best way to understand the modern biodiversity crisis is to look to the past. The fossil record lets us observe how organisms have responded to climate change, habitat loss, and invasive species over 4.5 billion years. In turn, this information helps us make informed choices about our future. A sauropod like Dippy is a particularly useful teaching tool. It could demonstrate how keystone herbivores can shape their environment. Or it could be compared to a mammoth or an elephant to show how different flora can lead to the evolution of completely different megaherbivores. The NHM’s rhetoric in favor of the whale unfortunately reinforces the idea that past life is dead, gone, and irrelevant. Nothing could be futher from the truth.

Plus, nothing’s cooler than a sauropod.

13 responses to “I Have Opinions About Dippy”