Allosaurus and Stegosaurus mounts at the Denver Museum of Nature and Science. Source

Just a quick post today to keep the blog moving. The Allosaurus and Stegosaurus skeletons at the Denver Museum of Nature and Science are among my all-time favorite fossil mounts. While there is no shortage of fighting dinosaur displays today, these mounts were something of a novelty when they were unveiled in 1995 as the centerpieces of the trendsetting “Prehistoric Journey” exhibition. A far cry from the stiff, macabre trophies that had dominated paleontology exhibits since the beginning of the 20th century, the Allosaurus and Stegosaurus plainly represent swift and active animals. Unlike many similar scenes, however, the action here is tempered with careful attention to anatomical detail: no limbs are hyperextended, and no bones are out of place. 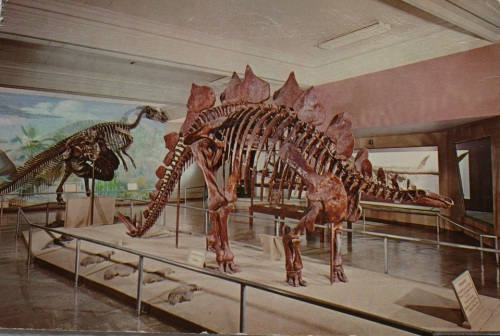 This postcard shows the original Stegosaurus mount around 1950.

High school teacher Frank Kessler discovered the Stegosaurus (DMNH 1483) in 1937 while leading a nature hike north of Cañon City. While the Garden Park region had been known for its Jurassic dinosaur fossils since the days of O.C. Marsh and E.D. Cope, Kessler’s find was in a previously unexplored area. Kessler contacted the Denver Museum of Natural History (now the DMNS), and Robert Landberg was dispatched to lead a thorough excavation. Landberg eventually recovered a 70% intact Stegosaurus, in addition to a multitude of turtles, crocodiles, and isolated dinosaur bones.

Back in Denver, Phillip Reinheimer assembled the Stegosaurus fossils into a standing mount. A former steelworker from Pittsburgh, Reinheimer was initially hired by the museum to maintain the furnaces, but eventually proved to be an uncommonly talented fossil preparator. Described by Johnson and Stucky as “a master craftsman,” Reinheimer remains something of a legend among preparators to this day. Reinheimer completed the Stegosaurus mount in 1938, and it remained a focal point of the museum’s fossil exhibits for decades afterward. In 1982, this specific specimen was named the state fossil of Colorado. 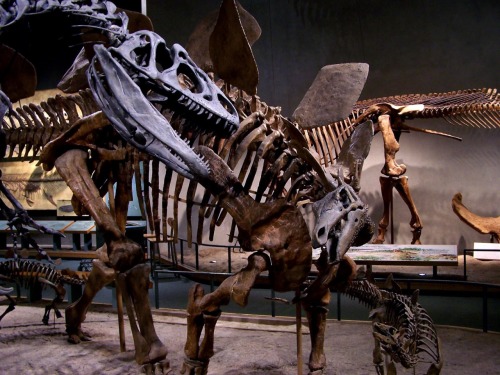 Another look at Allosaurus and Stegosaurus. Source

In 1979, 13 year-old India Wood discovered and identified an Allosaurus skeleton on her family’s ranch in Moffat County, Colorado. She excavated the find herself over a period of three years, until her mother encouraged her to reach out to the DMNS. After seeing the fossils Wood had been collecting in a box under her bed, paleontology curator K. Don Lindsay agreed to excavate the rest of the skeleton.

The project took two more summers to complete, and Wood remained an active participant. Although many at the museum remember being impressed by her knowledge and talent, Wood ultimately did not pursue paleontology as a career – she instead went on to earn an MBA from MIT and founded a business consulting firm. Meanwhile, Wood’s Allosaurus (DMNH 2149) remained in storage for more than a decade – until it was selected to feature in an ambitious new exhibit.

The DMNS had been a powerhouse of paleontology research in the early and mid 20th century, but by the 1980s its reputation had slipped away. That changed in 1989 when Richard Stucky came on board as the new Curator of Vertebrate Paleontology. Stucky brought order to the museum’s historic collections, and laid out plans for a comprehensive new exhibit entitled “Prehistoric Journey.” He also hired a new pool of talent to make the project happen, including paleontologist and preparator Ken Carpenter. As Chief Preparator, Carpenter was tasked with moving, restoring, and in some cases remaking the classic Reinheimer mounts, including the Kessler Stegosaurus. The DMNS crew also ventured into the field to collect new material for Prehistoric Journey. Among the most impressive finds was a new Stegosaurus (DMNH 2818), discovered by Bryan Small at Garden Park only a few hundred yards from where the Kessler specimen was unearthed. This articulated specimen clarified for the first time the position of the animal’s plates and spikes, and also confirmed that Stegosaurus had throat armor made up of tiny hexagonal ossicles. All of this informed the remounting of the Kessler Stegosaurus.

Carpenter’s take on this classic specimen paired it with India Wood’s Allosaurus, right in the middle of the Prehistoric Journey dinosaur gallery. The Stegosaurus is shown defending two (largely reconstructed) juveniles from the attacking theropod, while five or six Othnielia (casts) flee the scene. Twenty years after its 1995 debut, this scene is still among the most impressive fossil mounts around because of the seemingly effortless way it captures action and behavior. Carpenter and his colleagues did not only restore the shape of these animals but breathed life into them. The viewer cannot help but imagine the events that preceded this encounter, as well as the eventual outcome. The suspended bones are like brush strokes in an impressionist painting, swooping through the space and imbuing it with energy and motion. The fact that these are mostly original fossils rather than lightweight casts makes the display all the more impressive. I’ve said it many times before, but it bears repeating that fossil mounts are fascinating, challenging objects in that they are both authentic specimens and interpretive creations. In many cases these conflicting identities are jarring. However, with the right amounts of artistry, aptitude, and solid science, a fossil mount can transcend this juxtaposition and serve each identity equally well. Not an easy feat, but the DMNS Stegosaurus and Allosaurus are a defining example of the craft.