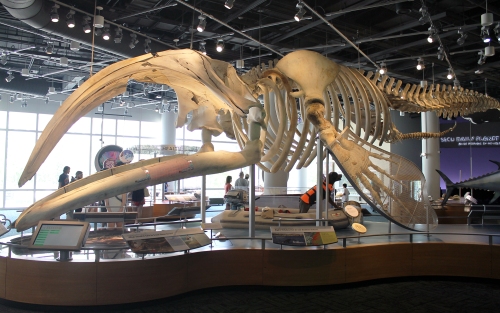 This pregnant right whale was killed when it was hit by a boat. Displayed with the fetus skeleton in situ, it now serves as a species ambassador.

The North Carolina Museum of Natural Sciences has been on my list of must-see museums for some time, and I finally had a chance to visit over Memorial Day weekend. Founded in 1879 as the North Carolina State Museum, the institution was initially a showcase for local agricultural and mineral products. Over the years, the interests of both the curators and the visiting public gradually nudged the museum in the direction of more generalized natural history. Now the largest natural history museum in the southeast, NCSM hosts a world-class research staff overseeing a collection of 1.7 million specimens. Since 2000, the museum has occupied a four-story facility in downtown Raleigh. A second wing, called the Nature Research Center, opened in 2012. There are also two satellite nature centers outside the city (which I did not visit) that are under the NCSM banner. 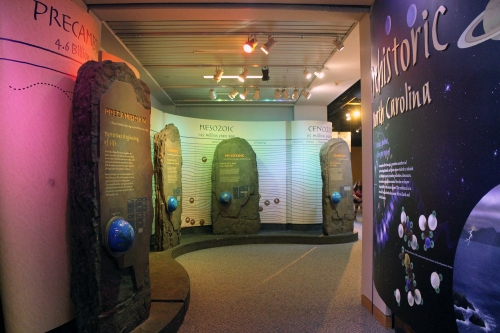 An introduction to geologic time.

First things first: the paleontology exhibit is quite good, although somewhat compact. Perhaps too compact, given its popularity and the amount of exhibit space the museum has to work with overall. Coming up the escalator to the 3rd floor, visitors are strongly encouraged to enter Habitats of North Carolina, a colorful and attractive walk through time. The initial spaces cover the basics. First, a series of pillars introduce the primary stages of life on Earth. This is followed by exhibits about where fossils come from, how we know how old fossils are, and so on. I particularly liked the “What to Fossils Tell Us?” display. Here, a grid of spinning cubes each hold small, conventional fossils. Visitors can rotate the cubes around to see that even these modest-looking remains can be very informative. For example, leaves and pollen provide detailed climate information, and a large croc scute suggests that a substantial body of water was present. 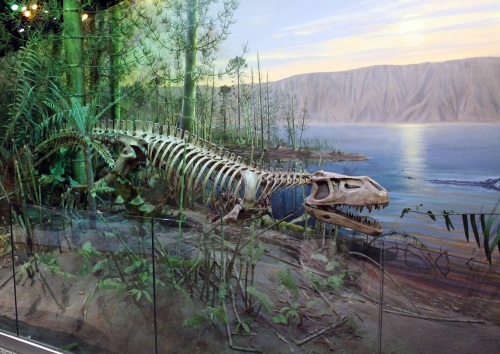 Prestosuchus in the Triassic scene. This appears to be a cast of the Brazilian AMNH 3856. 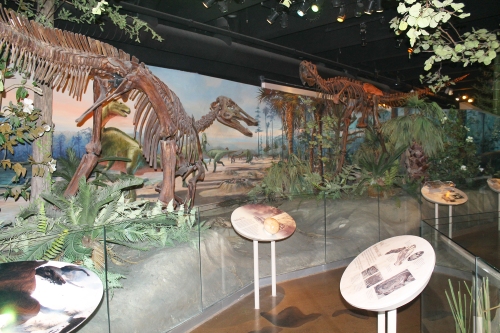 The rest of the exhibit is built around a series of tableaus in which mounts and models of charismatic animals are placed in landscapes of replica foliage. Small, illustrative fossils are in cases throughout. First up is a cast of Prestosuchus, lurking among some Triassic horsetails. Next, Edmontosaurus, Albertosaurus, and Pachcephlosaurus casts populate the Cretaceous alongside lovely ginkgos and magnolias. A baby hadrosaur model at the feet of the Edmontosaurus was apparently stolen (and recovered) in 2012. The famous Willo – a Thescelosaurus skeleton that maybe/probably doesn’t have mineralized heart tissue in its chest – is on display under glass. 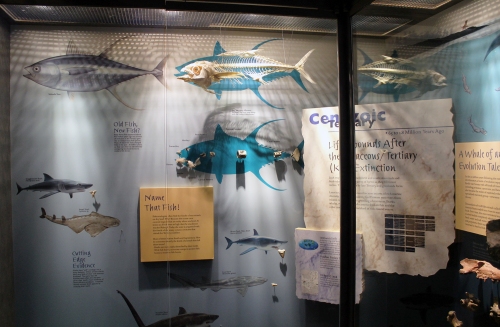 Did you know that most modern fish groups evolved only 20 million years ago? I didn’t! 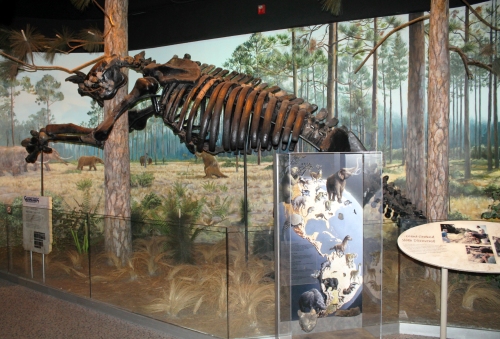 A ground sloth in the standard pole-dancing pose.

Moving into the Cenozoic, a set of attractive and informative cases describe the origin and evolution of modern fishes and whales. This is followed by glass tunnel through a life-sized diorama of a late Eocene sea. The models here are spectacular, but the space is altogether too dark. I found it difficult to see the diorama, much less read the signs. The final section is home to a real ground sloth skeleton. This is a composite of several specimens recovered in 1999 near Wilmington, North Carolina. Happily, the reconstructed portions of the mount are distinct and easy to see. Habitats of North Carolina ends on an eccentric note with a set of mannequins in pioneer garb discovering fossils in a creek bed. I’m not really sure what this adds to the exhibit narrative. 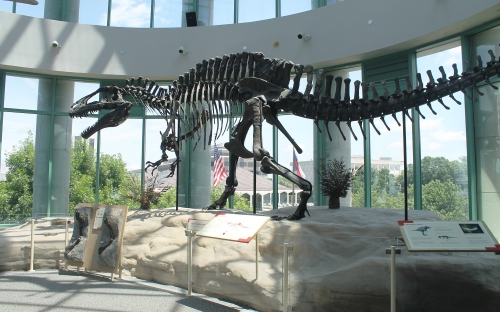 Acrocanthosaurus holds court in a sunny atrium all to itself.

The star fossil at NCNM is the only real Acrocanthosaurus on display anywhere in the world. Avocational fossil hunters Cephis Hall and Sid Love found this rare skeleton in Oklahoma in 1983. Unfortunately, a bad case of pyrite disease made the fossils an absolute nightmare to prepare, and it exchanged hands several times before ending up with the Black Hills Institute in South Dakota. In 1997, an anonymous donor purchased the skeleton on behalf of NCNM for $3 million, shortly after the museum came in second place in the bidding war for Sue the T. rex.

Acrocanthosaurus is a favorite of mine, and the mount is beautiful. The sunny atrium it’s situated in makes for an attractive display, but I wish it wasn’t so disassociated from the main paleontology exhibit. I’m told the mount included more original material when it debuted in 2000, but the creeping specter of pyrite disease has necessitated the removal of several bones for restoration and safekeeping. Be sure to see it soon, before the rest of the mount gets replaced with casts! 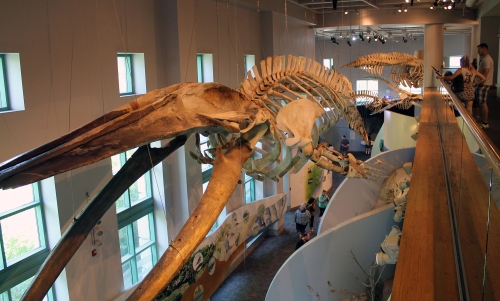 The paleontology exhibits are nice and all, but the real showstoppers at NCSM are the whales. No less than six giant whale skeletons are on display. Suspended over a corridor of sorts, the whales can be viewed from below or from a 2nd story mezzanine. Many museums have a whale skeleton or two, but I’ve never encountered this many cetecean skeletons in one place. From the utterly insane-looking right whale to the colossal blue whale, they are stunning to behold. Be sure to factor in plenty of time to simply stare. Immersive dioramas of local habitats, live animal exhibits, and a look at collecting and exhibition practices past and present round out the museum’s “old wing.”

As mentioned, however, a whole new wing of exhibits opened in 2012. Called the Nature Research Center, this is basically the interactive, citizen science-driven Museum of the Future that educators (including myself) have been demanding for years. This three story space is all about getting visitors involved in science. There are multiple drop-in “labs” where knowledgeable staff lead visitors through mini-experiments, designed to get people thinking scientifically. There’s a molecular lab where visitors can isolate and analyze DNA samples. There’s a digital imagery space where visitors can practice using GIS tools, or explore the possibilities of 3-D printing. And there’s a Q?rius-like collections library, where visitors can check out and study real bones, furs, minerals, and fossils. The Nature Research Center also includes several fishbowl-style labs where visitors can watch museum staff and volunteers at work. Even the highly interdisciplinary static displays are less about the “what” and more about the “how”: the tools, techniques, and people that make science possible. 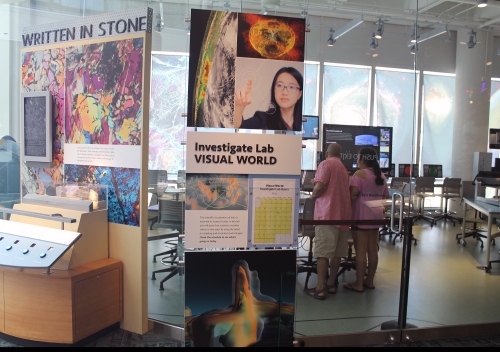 One of the lab spaces in the Nature Research Center.

Distressingly, on the day I visited, the traditional museum exhibits were crowded with visitors, but the Nature Research Center was nearly deserted. Since I was there on a holiday weekend, I was probably seeing a skeleton-crew version of the staff that is usually facilitating the interactive spaces. Still, the Nature Research Center is the embodiment of the modular, interactive exhibits that educators dream about. To see it empty while the story and object-driven exhibits were packed is somewhat disconcerting.

As the scientists say, though, a single anecdotal experience is not data. I’d be very interested to learn how this pioneering exhibit space holds up in the long run.