The Field Museum has shared this fascinating raw footage of the assembly and installation of Gorgeous George the Daspletosaurus (formerly Gorgosaurus and Albertosaurus). It is made available under a  Attribution-Noncommercial-No Derivative Works 3.0 license.

The fossils in question were discovered by Barnum Brown in 1914 during an American Museum of Natural History expedition to Alberta. It was the largest but least complete of several (presumed) Gorgosaurus skeletons collected by Brown, and only the skull was ever displayed in New York. In 1955, Field Museum trustee Louis Ware bought the fossils, an event heralded in the members’ newsletter as “the most important acquisition to the museum in recent years.” Preparator Orville Gilpin assembled the skeleton with the help of Stanley Kukzek, Cameron Gifford, and William Turnbull. Gorgeous George debuted in the Field Museum’s central Stanley Field Hall in March 1956, alongside a scale model created by staff artist Maide Weibe.

The similarities to modern mounting techniques on display in the video are more striking than the differences. From ratchets to chain hoists, the tools used by Gilpin and his colleagues appear quite similar to those used for this sort of work today. I suppose the lab coat-over-slacks look has gone out of style, though. 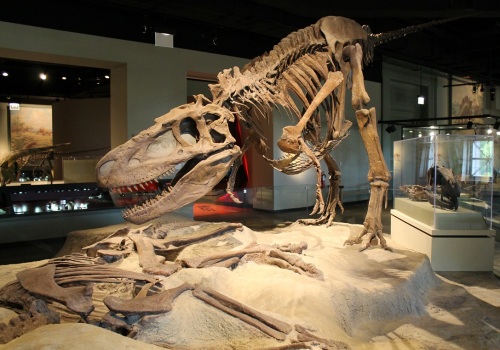 Gorgeous Gorge in its updated poses, as it is exhibited today. Photo by the author.

Gorgeous George remained in place until 1990, when it was relocated and remounted as part of the Life Over Time exhibition. While the updated Daspletosaurus trades the old Godzilla pose for a more accurate horizontal posture, it does not include the original skull (as Gilpin’s version did). The real skull is now on display at the Museum’s east entrance, however.

On the subject of Gorgeous George, check out Emily Graslie’s Brain Scoop video on paleoart at the Field Museum, which includes a not-to-be-missed dramatic reading of a poem by Curator Eugene Richardson!

One response to “Building Gorgeous George”