One Year to Deep Time

When the fossil halls at the National Museum of Natural History closed for renovation in 2014, five years seemed like an interminable amount of time to wait for the reopening. But the NMNH crew has been hard at work, and suddenly the June 2019 debut of the new National Fossil Hall is almost in sight. I’ve mostly avoided reporting on each and every bit of information pertaining to the new exhibit, but as we approach the one-year-to-opening milestone the drip is likely to become a deluge. That means that this is probably a good time to do a round-up of everything that has been officially revealed about the new exhibit up to this point.

The original architectural grandeur is back. Images from of the Smithsonian Institution Archives and the Washington Post.

The building that is now NMNH opened in 1910. Its granite-heavy, Beaux Arts construction was a departure from the Victorian style of the first United States National Museum, but it looked right at home with the other federal buildings around the National Mall. As originally designed, the building resembled a squat “T” from above, with three large wings (facing east, north, and west) extending from a central rotunda. The east wing — a vast space with bay windows, intricate plaster detailing, and a skylight three stories up — has always housed fossil displays. Over the course of the 20th century, however, the once spacious hall was repeatedly carved into smaller sections. Windows and architectural flourishes were covered up, and by the time the last round of renovations was completed in 1985 the east wing had become cramped and gloomy.

A major part of the current renovation has been returning the space to its original glory. Grunley Construction spent two years restoring and recreating the east wing’s 1910 architecture, as well as updating infrastructure and improving the space’s energy efficiency. Most of this process was visible via webcam. Last November, the Washington Post provided some stunning floor-level photos of the restored hall. Wide open and filled with natural light, the renovated hall is glorious to behold, even without the fossils.

A Story of Environmental Change

Many exhibits and books about paleontology portray the evolution of life as though it occurred in a vacuum. In fact, the evolution of animals and plants is primarily driven by environmental upheaval — changing climate, shifting geography, and so forth. Sometimes this relationship goes the other way, and keystone organisms (such as grass in the Neogene or humans in the present day) drastically change the world around them. Environmental change over time is at the heart of the National Fossil Hall’s story. It’s worth quoting the official theme statement in full:

Visitors to the Museum will be able to explore how life, environments, and ecosystems have interacted to form and change our planet over billions of years. By discovering and harnessing the tools and methods paleobiologists use to study fossils, visitors will gain a deeper understanding of how the world works.

The distant past affects all of us today and will continue to do so in the future. How will climate change impact the natural world and our daily lives? How can we make informed choices about our ecosystems as individuals and as a species? How can we all become informed citizens of a changing planet?

These themes are reflected by the physical layout of the exhibit, which is chronological but not strictly proportional. Specimens are clustered onto islands situated throughout the open floorplan, each representing North America at a particular point in time. While anchored by a few charismatic mounts, the islands also include all manner of small animals, invertebrates, and plants that were part of that environment. In this way, each island shows a complete ecosystem that existed at a particular time. Moving among these displays, visitors should get a sense of how phenomena like climate change and faunal interchange can completely transform an ecosystem over millions of years.

During the development process, curators and exhibit specialists agreed that the hall should not be an encyclopedia of past life. Instead, everything ties back to main story. Big, showy specimens like dinosaurs are contextualized as products of environmental change. Meanwhile, fossils that visitors might otherwise overlook but are critical to our understanding of ecological change over time, like pollen grains or leaves, are literally and figuratively pedestaled to emphasize their importance. 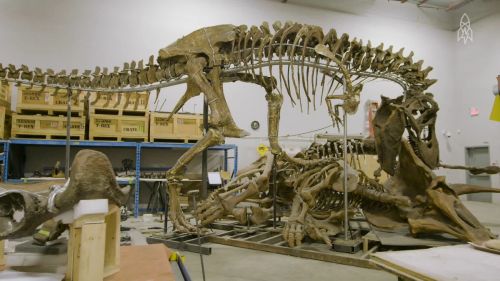 The centerpiece of the National Fossil Hall is a real Tyrannosaurus rex skeleton — the first real T. rex (as opposed to a cast) the Smithsonian has ever displayed. The specimen in question has been known as the “Wankel Rex” since it was discovered by avocational fossil hunter Kathy Wankel in 1988. It has been held in trust at Bozeman, Montana’s Museum of the Rockies, but since it came from Army Corps of Engineers land it is technically owned by the U.S. federal government. Although several casts of the Wankel Rex are on display around the world, the original fossils have never before been assembled into a standing mount. That’s changing now that the fossils have been transferred to the Smithsonian.

Curator Matt Carrano designed a deliriously cool pose, with the Tyrannosaurus poised as though prying the head off of a prone Triceratops. NMNH is visited by eight million people every year, so the Wankel Rex (now the Nation’s T. rex) will soon be the most viewed T. rex skeleton in the world. The Nation’s T. rex story has been covered by the Washington Post, NPR, National Geographic, and Smithsonian Magazine, among many others.

Historically, mounted fossil skeletons were most often given anatomically neutral poses. This was a structural engineering necessity as much as it was a curatorial preference. However, modern technology has made it possible to safely display casts and even real skeletons in surprisingly dynamic poses. At many museums, this has usually manifested as mounted skeletons fighting or simply roaring at each other. In contrast, the NMNH team has endeavored to create dynamic mounts that show a greater variety of interesting behavior evidenced by the fossil record. For example, the remounted mammoth (shared during a talk by NMNH Director Kirk Johnson) is pushing its tusks along the ground, as if clearing snow off the grass. The Allosaurus (headless in the right image) is crouching next to a nest mound. Even the aforementioned T. rex and Triceratops scene is inspired by real research into T. rex feeding mechanics.

Most exhibits about the history of life close at some point in the past, but the National Fossil Hall continues the story into the present day. We are in the midst of an extinction event of our own making, and anthropogenic climate change, habitat destruction, and invasive species are as dangerous as any asteroid. During our very limited time on Earth, humans have altered the climate, the rate of erosion, and the acidity of oceans. Whether or not you think adopting “Anthropocene” as a formal geologic unit is reasonable, we have inarguably changed the planet in geologically measurable ways.

Curator Scott Wing discussed his approach to interpreting the age of humans in a Geological Society of America talk and in an Earth Matters blog post. The key is to make it clear that in spite of our destructive potential, humans have the power to mitigate and manage the consequences of altering the world around us. The exhibit will show visitors how they can take responsibility for humanity’s collective legacy.

An updated Stegosaurus replaces the 2004 cast, which replaced the original 1913 mount. Images from the Smithsonian Institution Archives and Kirk Johnson on twitter.

The new Edmontosaurus cast replaces the original mount, which had gone unmodified since 1904. Images by NMNH Paleobiology and Will S.

Most of the dinosaur skeletons exhibited at NMNH were assembled before 1920. Originally excavated by O.C. Marsh’s crews in the 19th century, these specimens have gone on to lead second lives on display, and have been seen by generations of visitors. Nevertheless, time has taken its toll. Some mounts have been rendered out-of-date by new discoveries, while others have gradually deteriorated due to fluctuating temperature and humidity, not to mention constant vibration from passing crowds. Before the fossil halls closed in 2014, NMNH preparators had already dismantled three historic dinosaurs (Triceratops, Stegosaurus, and Camptosaurus) and replaced them with updated casts. Returning these fossils to the collections ensures their continued safety, while also giving paleontologists a chance to study them for the first time in decades.

The renovation has been an opportunity to give other at-risk specimens the same treatment. It was especially important to get the real Ceratosaurus, Edmontosaurus, and Thescelosaurus skeletons off the exhibit floor because these are all holotypes — the original specimens that were used to define the species. Set in plaster on the exhibit walls, these important skeletons were virtually inaccessible. And as the preparators discovered when they removed them, they had not even been fully extracted from the rock they were found in. The real fossils are now available for research, while casts with lively poses and up-to-date anatomy will take their place on display (before anyone panics, the new exhibit will still feature several real dinosaur skeletons).

As reported by the Bluefield Daily Telegraph, a Smithsonian crew of paleobotanists, geologists, and exhibits specialists visited the historic Pocahontas Exhibition Mine last November. This coal mine near Pocahontas, Virginia operated from 1882 to 1938, when ceased production and became a tourist attraction. The Smithsonian crew took photographs, video, and silicon molds of the mine’s walls, which are covered with Carboniferous-era plant impressions. A reconstruction of the fossiliferous mine will anchor the Carboniferous section of the exhibit.

Treasures from the Collection 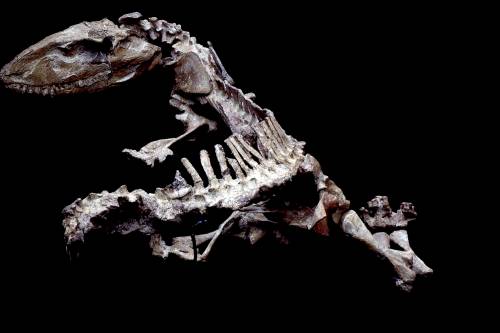 A near-perfect Ophiacodon from Texas. Photo via the NMNH Department of Paleobiology.

A typical natural history museum has less than one percent of its collection on display at any time, and NMNH is no exception. In addition to introducing brand-new specimens and updating old ones, the renovation is an opportunity to bring a variety of never-before-displayed objects from the collections to the display floor. Of the hundreds of specimens earmarked for display, I can only highlight a few.  There’s the historic cast of the plesiosaur Rhomaleosaurus, which has been in the collection since 1895 but never displayed. There’s the skull of the tusked whale Odobenocetops, which preparator Michelle Pinsdorf profiled in a webcast last year. Carrano showed NPR’s Adam Cole a sauropod osteoderm, collected decades ago but only identified recently. And then there’s the near-perfect Ophiacodon pictured above, collected in 1988 by Arnie Lewis and Nicholas Hotton. I remember this guy from my intern days, when it was referred to as “sleeping beauty.”

Research Casting International will start installing the large skeletons this summer, and then the countdown to opening day begins in earnest. Here’s wishing the NMNH team all the best as their years of work finally comes to fruition!

7 responses to “One Year to Deep Time”