The old fossil mammal exhibits at the National Museum of Natural History were notable for their sheer diversity. From rabbits to elephants and from bats to whales, virtually every major group of North American mammals, particularly eutherian (placental) mammals, was represented. By my count, there were no less than 48 mounted mammal skeletons on display (not including individual skulls and other parts) in 2014, arranged by time period and distributed across three sizable halls.

The comprehensive nature of these exhibits was largely thanks to C.L. Gazin, head curator of the Division of Vertebrate Paleontology in the 1950s and 60s. During the modernization of the fossil halls in the early 1960s, Gazin focused his efforts on assembling a complete narrative of Cenozoic mammal evolution. The six-part exhibit debuted in 1961 in Hall 5, and was relocated two decades later to Hall 3. Gazin also initiated the construction of the adjacent Ice Age exhibit, although it would not be permanently opened to the public until 1974.

Now that the fossil halls are being renovated, NMNH staff face the enormous task of disassembling and restoring the dozens of historic mammal skeletons. Many will return when the exhibit reopens in 2019, but others may be retired to the collections if they are deemed too fragile for continued display, or if they are not illustrative of the story being told in the new exhibit.

This Megaloceros has the distinction of being the Smithsonian’s first mounted skeleton composed of original fossils. Photo by the author.

The Smithsonian’s first mounted fossil skeletons went on display in 1871 in the building colloquially called “the castle.” The exhibit included plaster casts of the ground sloth Megatherium, the tortoise Colossochelys and the glyptodont Scistopleurum, all made from originals at the British Museum. The following year saw the addition of the giant deer Megaloceros (USNM V 7051) — the Smithsonian’s first mounted skeleton composed of original fossils. The Smithsonian purchased this complete Megaloceros, which was uncovered in an Irish peat bog, from Philadelphia-based antiques dealer Thomas and Sons. The mount was assembled by none other than Benjamin Waterhouse Hawkins, the sculptor who created the famous Crystal Palace dinosaurs.

Megaloceros in the southeast court of the Arts and Industries building, circa 1896. The British Museum Megatherium cast can be seen on the left. Source

When construction of the original United States National Museum (what is now called the Arts and Industries Building) was completed in 1881, all of the fossil displays were moved to the new setting. Vertebrate fossils found a home in the 80,000 square foot southeast court. Gradually, the Megaloceros and British Museum casts were joined by many more crowd-pleasing skeletons, including a copy of the Philadelphia Hadrosaurus, an Edmontosaurus, a Triceratops, and a mastodon (discussed below). By the time the USNM was preparing to move to yet another new building across the national mall in 1910, the southeast court had become quite crowded. Unfortunately, the Megatherium and Collossochelys never made it to the new location. These casts were discarded due to the damage they had accumulated while on display. Although the glyptodont cast was still on exhibit as of 1940, it too was eventually destroyed. Happily, the Megaloceros survived, and has been included in each subsequent iteration of the fossil exhibits.

Starting in 1974, the Megaloceros was displayed alongside the extinct bird Diornis in the Ice Age hall. It’s weight was partially supported by cables descending from the ceiling, which proved to be a problem when it came time to disassemble it in July 2014. Rather than attempting to lift the delicate skull and heavy antlers off the armature, the exhibit team strapped the skull to a mechanical lift so that it could be slowly and gently lowered to the floor. In the new National Fossil Hall, the Megaloceros will be sitting on the ground. This pose was selected in order to bring the spectacular antlers to visitors’ eye level.

The Indiana mastodon in the Hall of Extinct Monsters. Photo courtesy of the Smithsonian Institution Archives.

In 1901, Michigan farmer Levi Wood found a well-preserved, nearly complete Mammut americanum (USNM 2106) in a peat swamp on his land. The USNM purchased the rights to excavate the skeleton from Wood and began work that same year. The specimen turned out to be virtually complete, save for the forelimbs and left hindlimb. Alban Stewart mounted the skeleton, adding a left hindlimb from another mastodon specimen from Missouri, and filling in other missing elements with plaster replicas. The completed mount was first exhibited at the Louisiana Purchase Exposition in St. Louis, Missouri in 1904.

For a time, there were two mastodon mounts on display in the Hall of Extinct Monsters. Photo courtesy of the Smithsonian Institution Archives.

After the Exposition, the Michigan mastodon was added to the fossil displays in the  southeast court of the Arts and Industries Building. It remained there for four years, before joining the rest of the paleontology exhibits and collections in the move to the new USNM building.

In 1915, a second mastodon (USNM V 8204) from Indiana was added to the Hall of Extinct Monsters. The matching set can be seen on the left side of the image above, with the plaster skull of a Deinotherium (USNM V 1917) positioned between them. The larger Indiana mastodon persisted through the 1963 and 1981 renovations, and will return with an energetic trumpeting pose in 2019. NMNH loaned the Michigan mastodon to the Oregon Zoo for many years. It has since been returned, dismantled, and retired to the collections.

Stegomastodon in 2014. Photo by the author.

The young male Stegomastodon (USNM 10707) was collected by James Gidley and Kirk Bryan collected this skeleton in the San Pedro Valley of Arizona. This 1921 collecting trip also produced the museum’s Glyptotherium. While the genus Stegomastodon was erected in 1912, Gidley referred his specimen to a new species, S. arizonae, due to its more “progressive” physiology and slightly younger age. By 1925, the skeleton was mounted and on display in the Hall of Extinct Monsters. While the original mount used the real fossil tusks, these were eventually replaced with facsimiles. 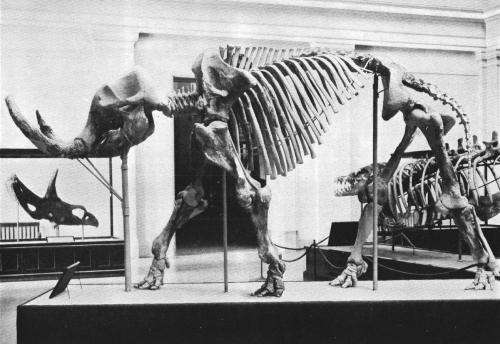 Stegomastodon with its original tusks. Photo from Gidley 1925.

The Stegomastodon will not be returning when the National Fossil Hall reopens in 2019. For one thing, there are already two big elephants on display: the mammoth and the mastodon. Elephants take up a lot of space, and a third proboscidean offers diminishing returns when compared to the amount of floor space it requires. More importantly, the Stegomastodon is a holotype specimen, and the exhibit team elected to remove most of these important specimens from the public halls. This is both to keep them safe from the damaging effects of vibration, humidity, and fluctuating temperature, as well as to make them more accessible to researchers. 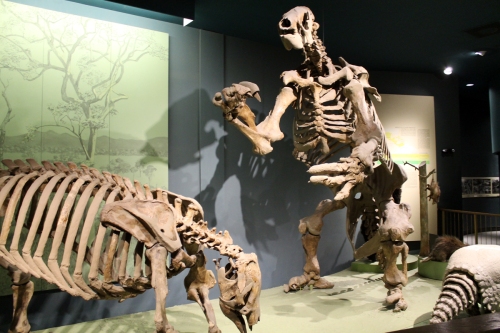 The unique and impressive Eremotherium pair. Photo by the author.

The immense pair of giant ground sloths (USNM V 20867 and USNM V 20872) are among the most impressive and unique skeletal mounts at NMNH. Many a visitor has ascended the ramp to the Ice Age gallery only to stop and stare at them. Unlike the Megaloceros, mastodon, and many others, these were new additions added during the 1960s modernization. Gazin’s team recovered the fossils in Panama between 1950 and 1951, bringing back over 100 plaster jackets representing at least eight individual sloths of the genus Eremotherium.

John Ott and Gladwyn Sullivan attach the scapula of the standing sloth. Source

Assistant Curator of Cenozoic Mammals Clayton Ray oversaw the assembly of the two Eremotherium mounts in 1969. Both the larger standing sloth and smaller kneeling one are composites of fossils from many individuals (there are also plenty of reconstructed bones, easily spotted by their solid beige coloration). Most of the surplus bones were repatriated to Panama before the mounts went on display. The sloths were originally positioned back-to-back on a central platform, accentuated by an illuminated opening in the ceiling. However, this layout only lasted a few years. In 1974, the Quaternary Hall was completely reorganized into the Hall of Ice Age Mammals and the Age of Man. In the new arrangement, the Eremotherium pair was relocated to a corner at the north end of the gallery. In 2019, only one Eremotherium will be on display.

This mammoth was assembled from as many as 70 individual specimens. Photo by the author.

Although it was always labeled as a woolly mammoth (Mammuthus primigenius), the Smithsonian’s third proboscidian skeleton (USNM V 23792) is actually a composite of over fifty individual specimens, some of which probably belong to the more southerly Columbian mammoth (Mammuthus columbi). Most of these fossils were acquired in a trade with the American Museum of Natural History in the 1960s, specifically to build a mounted skeleton for the Ice Age hall. Perhaps because they were acquired for display, rather than study, the origin of these fossils was not well-recorded. It is only now that the mammoth has been disassembled that collections staff can begin to to learn more about this iconic chimera. Some of the bones are marked with the year and location of their collection, crucial details for piecing together their provenance.

The mammoth in its new, snow-shoveling pose. Photo courtesy of the Smithsonian Newsdesk.

In the new fossil hall, the mammoth will be leaning forward, pushing its great tusks across the ground as though it were brushing away snow. In the meantime, the original mount was digitally scanned, and the model is freely available from Smithsonian 3D.

Gilmore, C.W. 1906. Notes on Some Recent Additions to the Exhibition Series of Vertebrate Fossils. Proceedings of the United States National Museum No. 30.

Marsh, D.E. 2014. From Extinct Monsters to Deep Time: An ethnography of fossil exhibits production at the Smithsonian’s National Museum of Natural History. http://circle.ubc.ca/handle/2429/50177