Over Labor Day weekend, I visited the Calvert Marine Museum in Solomons, Maryland. The Museum, which features both indoor and outdoor exhibits, covers a wide range of Chesapeake regional history, including Patuxant Indian culture, the War of 1812, the local fishing industry and of course, Miocene marine fossils. The paleontology gallery, called “Treasures from Our Cliffs”, is nicely done and surprisingly high in production value for the museum’s size. Starting with an extensive entry gallery that places Chesapeake area fossils in a global context, the exhibit also includes fossils of seals, whales, invertebrates and assorted terrestrial mammals, plus a neat recreation of a cliff-side excavation. 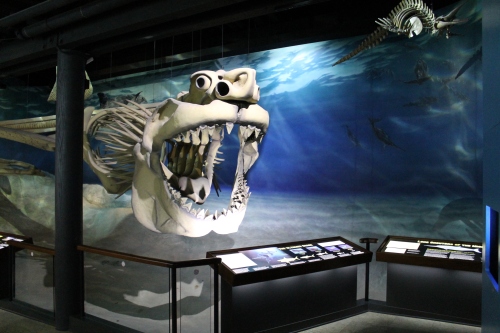 The Carcharocles megalodon at the Calvert Marine Museum.

What I want to talk about most, though, is the big foam shark pictured above. This is the exhibit’s centerpiece attraction, a complete replica of the cartilaginous skeleton of the infamous giant extinct shark Carcharocles megalodon. Since shark skeletons are primarily made up of soft cartilage, most of their bodies are very unlikely to fossilize. While teeth and lithified vertebrae of C. megalodon are relatively common, a complete skeleton can only be created as a replica. As such, the Calvert Marine Museum’s display is a scaled-up model of the cartilaginous skeleton of a modern Carcharodon chararias (great white shark), with a few proportional adjustments based on known fossils. The result is undeniably impressive: suspended over an ocean backdrop, the 37-foot model absolutely steals the show in the paleontology exhibit.

Nevertheless, I find it absolutely fascinating that the museum would go to such lengths to create a replica shark, particularly given its substantial collection of original fossils. The foam shark’s existence can be traced to the beginning of the 20th century, when there was a dramatic rush among large urban museums in the United States to collect and mount the biggest and most spectacular dinosaur skeleton that could be found. This fossil craze was largely motivated by the vanity of the museums’ wealthy benefactors, but proved to be extremely productive for both paleontologists and museums. Mounted dinosaur skeletons sprung up seemingly overnight in cities across the country, making names like “Brontosaurus” and Diplodocus household terms and igniting a wave of interest in museums and natural science.

As a result of this mounting spree, the public conception of dinosaurs and other prehistoric animals is to this day irreversibly intertwined with its conception of museums. When we think of fossils, we think of grand museum halls populated by towering skeletons. This connection is so ingrained that mounted skeletons have become, in the public eye, the only proper way to display prehistoric animals. Patrons of paleontology exhibits expect mounts, and museums must deliver, even if it means purchasing a cast from another institution, or in the case of the Calvert Marine Museum, sculpting one outright.

A closer look at C. megalodon.

It is true that very few museum mounts feature the complete skeleton of a single animal – they are typically composites of many specimens, or have missing parts filled in with casts or sculpted elements (see this SVPOW post on Kyle Davies, who sculpts bone replicas for OMNH). Probably the most important function of a mount is to present fossil material in a format that non-specialists can easily understand and appreciate. They show viewers what extinct animals would have been like in life, and let us perceive them in relation to our own human scale. But unlike a mural or life-sized model, which are obviously reproductions, mounts retain the aura of authenticity that comes from displaying known fossils. To display a skeleton is to imply that we are seeing real specimens, or at least replicas standing in for specimens that exist somewhere else. Whether reasonable or not, this is the expectation ingrained by over 150 years of fossil mounts in museums.

This means that the C. megalodon at the Calvert Marine Museum is pushing the concept of a fossil mount to its very limit. While this is without doubt a very reasonable reconstruction of what a C. megalodon skeleton would have looked like, only a minuscule fraction of what is on display represents fossils that have actually been uncovered. The question is then, is a display like this a misrepresentation of scientific knowledge and the fossil record?

Not how vertebrate fossils are found. From Dinosaurs: A Prunell Magic Pop-Up Book, via LITC.

To the Calvert Marine Museum’s credit, the exhibit signs clearly explain that the C. megalodon skeleton is a replica, and provide a detailed explanation of how and why it was made. What’s more, the shark mount is merely an extreme example of filling in gaps with probable reconstructions, a process needed to make the construction of mounts of most prehistoric animals possible at all. The field of vertebrate paleontology is, in fact, largely based on the premise that incomplete remains can be understood in the context of other, better known relatives. Then again, if I learned anything teaching undergraduate anatomy, it’s that the concept that vertebrates share a body plan inherited through common ancestry is not widely known. This might be worth considering when presenting fossil mounts in general: after all, mounts primarily exist for the public, not for experts (although see Kenneth Carpenter’s comments on an earlier post).

The Calvert Marine Museum’s C. megalodon definitely raises some weighty questions about displays of scientific specimens in museums. In the context of vertebrate fossils, what qualifies as a real specimen, and what is well-supported extrapolation? What role should a museum play when displaying scientific knowledge? Should museums merely serve as repositories for original objects found in nature, or is the goal to provide context and meaning for those objects? Can a boundary between the two be defined at all?