In Defense of New Museums

As a museum* educator, I work with two kinds of experts: researchers who create knowledge and education specialists who disseminate knowledge. Both groups have ostensibly the same mission, which is to effectively communicate credible information about the world around us. Generally, both sides collaborate effectively, due in no small part to a shared enthusiasm for their work. But there is one issue (that has been raging for decades) in which researchers and educators frequently seem to be shouting past each other, complaining about what one another are doing wrong but not making much progress in reconciling their priorities. This issue is, of course, “new museum” exhibit aesthetics, the trend toward replacing traditional academically-oriented displays of specimens with dynamic, interactive leaning experiences that use specimens alongside interactive activities and multimedia to communicate specific educational messages to a broad audience.

*When I say museum, I mean natural history or science museum. Art museums are a completely different beast, and one I won’t pretend to understand.

From the perspective of many researchers and certain sets of museum-goers, these newer exhibits are frivolous lowest-common-denominator attractions better suited to amusement parks than serious institutions. For example, in a recent Tetrapod Zoology review of the London Natural History Museum’s Extinction exhibit, Darren Naish criticizes computer-based interactive exhibits because they “take up space that really should be spent on something far more worthwhile” and “give visitors the excuse to do the same old crap they do every other day of their lives (look at screens, play videogames, use touchscreens) when they really could be treated to a more unique experience.” Likewise, an all-encompassing rant about new museums can be found in this (admittedly 6 year old) post by Matt Wedel, which is well worth a read (seriously, read it now and then come back to this).

The Hunterian Museum as it appeared in the 1800s: ALL OF THE SPECIMENS.

But in direct contrast to Wedel’s insistence that the intrinsic value of real specimens is all museum-goers want or need, there are editorials like this one by James Durston, which I will charitably describe as provocative. Durston tells us that museums that only display artifacts for their own sake are “classrooms made of cold granite, the only sense of life emerging from the tourists.” He argues that most objects on display in museums don’t matter as much to visitors as museum workers think they do, and pleads for more context and more reason to care.

So what’s the deal? Are modern museums too focused on providing context for their collections, or not focused enough? Let me begin by explaining why modern museum exhibits look the way they do. A century ago, or even 50 years ago, exhibits were arranged and labels were written almost exclusively by expert curators. These exhibits were, by and large, created with an audience of “interested people” in mind, meaning either other experts or clientele with enough leisure time to learn the jargon presented to them. The majority of visitors who came through the door were not directly catered to, because exhibits were considered an afterthought to the real work of the museum: research and collections management.

In the past 30 years, however, the museum field has decided that it can do better. Museums shifted from inwardly focused, primarily academic institutions into focal points for lifelong learning that operate in service to a wide community of visitors. Go to the website of your favorite museum and check out their mission statement (it should be pretty easy to find). I just did, and the mission of the National Museum of Natural History is to “increase knowledge and inspire learning about nature and culture, through outstanding research, collections, exhibitions, and education, in support of a sustainable future.” Note that the museum doesn’t seek to increase knowledge and inspire learning just for a core audience of studious, well-read people, but for everyone. That means the museum needs to offer content that is interesting to all sorts of people, whether they learn best by reading and absorbing information, by physically doing something, by making choices for themselves or by discussing an issue with others. Preserving  and studying collections is no less important than in museums of yore, but these activities are understood to be in service of providing knowledge to the widest possible audience.

This shift in focus has inspired museum exhibits with more explicit educational goals, as well as attempts to create learning experiences that reach visitors other than those already keyed in to the customary language of academia. Drawing heavily on Gardner’s multiple intelligences, modern exhibits are intended to cater to diverse audiences that learn in a variety of different ways. In particular, hands-on mini experiments and computer-based games have become staples in science exhibits in order to reach visitors who learn better by doing than by observing. These interactive elements (we just call them interactives in the biz) are not appealing to everyone, but museums serve a broad community and have no business being exclusionary in the services they provide.

Beyond any moral or educational imperative, however, modern museums must be accessible because they are nonprofit institutions that rely heavily on public funds. They are funded based on the promise that they will provide educational resources for their communities, and that means serving more than a small subset of the population. Furthermore, ever-tightening budgets mean that museums need to be strictly managed. Educators have no choice but to establish clear standards of success for their exhibits, and to develop means to track attendance and audience engagement. Just to keep our jobs and keep museum doors open, we need to be able to clearly articulate who we are serving, how we are benefiting them and how we know. 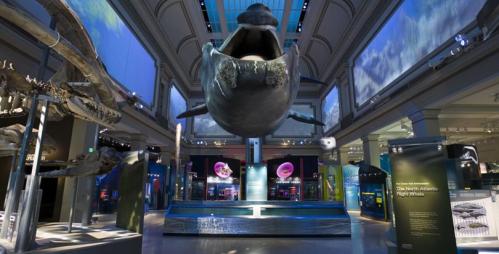 If it was not clear, I absolutely agree with the goals behind new museum design. As  was argued in the American Alliance of Museums’ 1984 “Museums for a New Century” commission report, “if collections are the heart of museums, what we have come to call education – the commitment to presenting objects and ideas an an informative and stimulating way – is the spirit.” General audiences can certainly experience awe and wonder when presented with neat stuff, but museums can and should provide more than that. A hundred birds from around the world look impressive on a shelf, but they are much more interesting when the viewer understands the evolutionary processes and biogeography that produced such diversity. A little bit of context goes a long way to making such an exhibit is accessible and valuable to the widest possible audience.

In practice, however, I will concede that many attempts at broadening the appeal of natural history exhibits are pretty bad. Some modern museum exhibits use technology in terrible ways, and many attempts to increase interactivity are bafflingly pointless or even counterproductive. For instance, a dinosaur exhibit I visited earlier this year includes a green-screen stage where visitors can place themselves in a scene with dinosaurs running around. The result is not only painfully dated, but it has no educational purpose and may well encourage people to think that humans and dinosaurs once co-existed. Likewise, an exhibit on human evolution features a glorified photo booth that makes visitors’ faces look like other hominids. This non-educational attraction is consistently the most popular element of the gallery, distracting visitors from the fantastic displays and specimens all around it. More generally, an increasing number of exhibits are incorporating profoundly pointless touch-screen computers that let visitors browse photos of the specimens on display right in front of them. Just because an exhibit element is hands-on doesn’t mean it is actually helping visitors interact with exhibit content.

One reason lousy interactives keep being designed is that our evaluation procedures* are not always great at separating good exhibits from appealing ones. A good interactive provides informative content in an engaging way, while an appealing one is engaging but lacking in content. Many visitors may speak highly of just-appealing interactives, but that doesn’t mean these belong in museums. The aforementioned budget woes are also a factor here: interactives that draw crowds for any reason are a big help when scrounging for ways to fund research and preservation. There are tough calls to make when deciding between what visitors most want to see and what is actually worthy of an educational institution. There are no easy answers, especially when museums are consistently hurting for funding.

*Do note, however, that actually testing whether exhibits are meeting their educational goals has finally become commonplace…for far too long museum workers just assumed anything they made was good enough.

Nevertheless, when an interactive display works, when visitors’ eyes light up with understanding by working out a scientific problem for themselves, the process is absolutely worthwhile. Earlier this year, I raved about the low-tech brilliance of an activity in the Academy of Natural Sciences that let visitors physically act out the difference in upright and sprawling gaits. And the NMNH Human Origins exhibit features a fantastic computer game where visitors play the part of a future world leader and experience firsthand the challenges and consequences of overpopulation, food shortage and invasive species. Exhibit interactives, both technology-based and otherwise, are difficult to pull off, and many museums have failed at the task. But we owe it to our visitors to try.

5 responses to “In Defense of New Museums”