According to Twitter, today is #MuseumDinos day, possibly because it’s the 10th anniversary of the groundbreaking DinoSphere exhibit at the Indianapolis Children’s Museum. At any rate, dinosaurs in museums is a thing I’m kind of interested in, so here’s the first ever DINOSOURS! listicle: the hastily-planned and in-no-way-definitive top seven coolest extinct animal mounts from around the world.

Let’s start with the eldest. There are quite a few ground sloth mounts in the world, but the Megatherium in Madrid has the distinction of being the first assembled skeleton of a prehistoric animal ever put on public display. It’s hard to imagine, but when Juan Bautista Bru created this mount in 1795, biological evolution was completely unknown, and naturalists were just beginning wrap their heads around the idea that organisms could become extinct. This Megatherium was a product of a very different era of human understanding about the natural world, but unlike other historic mounts like the Peale mastodon and Leidy Hadrosaurus, it has survived to the present day.

6. Stegosaurus and Allosaurus, Denver Museum of Nature and Science 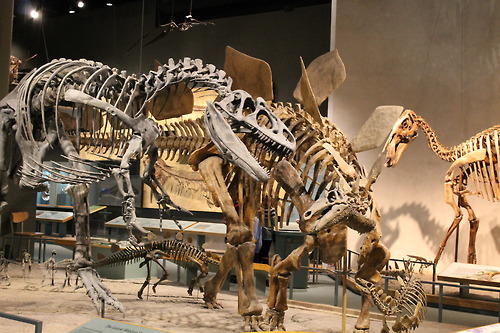 Stegosaurus and Allosaurus at the Denver Museum of Nature and Science. Source

In addition to being a respected scientist, Ken Carpenter is among the most skilled fossil mount creators working today. Among his most recognizable work is the Stegosaurus and Allosaurus face-off at the Denver Museum of Nature and Science. Featuring a remount of a historic Stegosaurus specimen and an Allosaurus discovered and mostly excavated by 12-year-old India Wood, this lively display was unveiled in 1995 as the centerpiece of the “Prehistoric Journey” exhibit. In addition to biomechanical accuracy exceeding many other modern mounts, this display by Carpenter and Bryan Small is imbued with remarkable dynamism and energy.

Then again, there are a lot of fighting dinosaur mounts. I love that dinosaurs had big teeth and killed things as much as the next person, but it’s refreshing to see a mount that showcases some other aspect of these animals’ lives. That said, the Spanish Museo Jurasico de Asturias is, as far as I know, the only museum to display a pair of copulating dinosaurs. The T. rex on the bottom looks like yet another Stan cast, but I’m not sure about the one on top.

The original “Dippy” the Diplodocus at the Carnegie Museum of Natural History.

Like the Madrid Megatherium, this Diplodocus is intractably situated in history. If the worldwide popularity of dinosaurs could be traced to a single specimen, it would be this one. At the turn of the 20th century, Andrew Carnegie, who funded the creation of the Carnegie Museum in Pittsburgh, demanded that his museum find and display a sauropod dinosaur. This launched the Great American Sauropod Race, a frenzied competition among the United States’ large natural history museums to assemble the biggest dinosaur for display. The American Museum in New York was first across the finish line in 1905 with their composite “Brontosaurus”, although the Diplodocus collected by the CMNH team was a more complete specimen. Not to be outdone by his New York competitors, Carnegie commissioned several casts of the skeleton, which he presented to several cities in Europe and Latin America. Diplodocus casts sprang up seemingly overnight in London, Paris and elsewhere, and the original specimen was unveiled in Pittsburgh in 1907.

The biggest fossil mount in the world. Source

The Berlin Giraffatitan is on this list for two reasons. First, it’s really big. The biggest mount in the world composed mostly of original fossils, as a matter of fact, and big things are awesome. However, this display is also a fascinating example of the cultural meaning natural specimens can take on when placed on display. The fossils themselves were removed from what is now Tanzania under the authority of a colonial government that is no longer considered legitimate or appropriate, and the mount itself was completed in 1935, a time when the hall it was displayed in was filled with swastika flags. The fossils themselves (and the current museum staff that have inherited them) obviously have nothing to do with Nazis or colonial imperialism, but the display they were incorporated into is entrenched in history that should not be ignored or forgotten.

This is actually the second iteration of this display, the bow-legged original having been remounted in 2007.That’s one of the Carnegie Diplodocus casts peeking in from the right, by the way.

Triceratops at the National Museum of Natural History.

Triceratops is objectively the coolest dinosaur ever, and NMNH is the home to the definitive (and first) Triceratops mount. Charles Gilmore and Norman Boss constructed this composite skeleton in 1905 from fossils collected throughout Wyoming, resulting in a mount that was inaccurate in many details; most noticeably, the skull was too small compared to the rest of the body. Nevertheless, this Triceratops was the basis for illustrations in popular books for decades to come. In 2000, Steve Jabo and others retired the original mount, conserving the fossils and replacing them in the exhibit hall with a casted duplicate. Among other improvements, the undersized head was corrected by digitally scanning the original and 3D-printing it at a different scale.

Allosaurus and Barosaurus mount at the American Museum of Natural History. Source

Was there ever any question what would be in first place ? The Barosaurus encounter in the Theodore Roosevelt rotunda at AMNH is a prime contender for the world’s most spectacular fossil mount. What I like most about this exhibit is the purposeful mise-en-scene: the dinosaurs decisively fill the space, drawing the viewer’s eye not only around the room but up the neck of the 50-foot Barosaurus toward the high vaulted ceiling.  Since 2010, visitors have been able to walk between as well as around the mounts, inserting their own human scale into the scene. According to AMNH paleontologist Mark Norrell, the objective of this exhibit was “to imagine dinosaurs as living organisms, facing challenges similar to those that confront animals today.” However, Norrell freely admits that the display was also meant to be a spectacle, emphasizing the “romantic history and grandeur of fossils”.

Brinkman, P.D. (2010). The Second Jurassic Dinosaur Rush: Museums and Paleontology in America at the Turn of the 20th Century. Chicago, IL: University of Chicago Press.