Stan the Tyrannosaurus with a modern eagle. Photo by the author.

Last week, I had a chance to visit the Dinosaur Discovery Museum in Kenosha, Wisconsin. I had no idea this place existed until recently, but it’s a short drive north from the Chicago area, and has apparently been open since 2006. The Museum is a joint venture between the municipally funded Kenosha Public Museum system and Carthage College, and is housed in a lovely 1930s post office (on the National Register of Historic Places). As I understand it, the Dinosaur Discovery Museum was initially imagined as a space to host the undergraduate paleontology program at the College, which is led by Dr. Thomas Carr. While the Museum does include a working fossil prep lab and displays of recent finds from Carr’s field expeditions in Montana and South Dakota, the primary draw for most visitors is the permanent exhibit hall. Although less than 100 feet across, this space is packed with more theropod mounts than I have ever seen in one place.

Nary an ornithiscian in sight. Photo by the author.

Naturally, the theme of this theropod-centric exhibit is bird evolution. Circling the central pedestal counter-clockwise, visitors can see the radiation of theropods from primitive forms like Herrerasaurus to larger ceratosaurs and tetanurans and finally to increasingly bird-like coelurosaurs. The Dinosaur Discovery Museum must have gotten a very generous initial donation, because they seem to have bought out virtually the entire catalog of casts from both the Black Hills Institute and Triebold Paleontology. 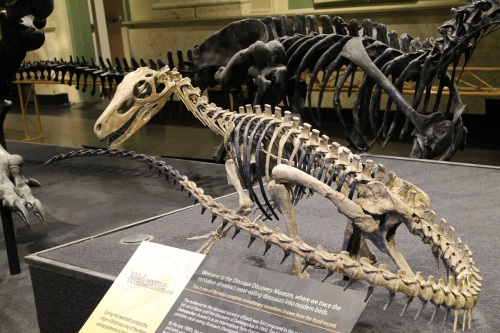 A squatting Hererrasaurus is one of many unusually posed mounts at the Dinosaur Discovery Museum. Photo by the author.

Many of the casts were familiar to me, including the ubiquitous Stan, the Acrocanthosaurus from the North Carolina Museum of Natural Sciences, and the Anzu from the Carnegie Museum of Natural History. Nevertheless, it’s extremely cool to see such a complete range of theropod diversity in one place. I could directly compare any bone from a given mount to the same bone on any other, or even to the helpful selection of modern bird skeletons. The only thing that would make this exhibit more complete would be the inclusion of  growth series from the taxa for which this is known, like Tyrannosaurus and Allosaurus. And for the record, jaded paleophiles, T. rex looks really impressive alongside this menagerie. Overrated, my eye.

Torvosaurus scratches its jaw. Photo by the author.

Unlike some exhibits, the Dinosaur Discovery Museum does not shy away from the fact that all the skeletons on display are casts. Most of the mounts are very obviously painted in two colors, showing precisely which bones are based on real finds and which are sculpted reconstructions. Unfortunately, a handful of mounts inexplicably lack this information, which could confuse some visitors. One helpful side effect of displaying casts is that the dinosaurs can be placed in a variety of life-like poses. These theropods are not all staring straight ahead with mouths agape – instead, we are treated to displays like the Torvosaurus above, which is scratching its head with its foot.

Signs like this accompany each dinosaur. Photo by the author.

The signage is of similarly high quality. Each dinosaur is accompanied by an attractive panel that provides expected information like the animal’s diet and time period, as well as a very helpful section identifying the quarry where the fossils were found and in most cases, the repository housing the original specimen. Additional signs on the walls cover the origin and extinction of dinosaurs, as well as the many lines of evidence that birds are surviving dinosaurs. Although they look a bit wordy at a distance, these signs are quite well-written for inclined to peruse them.

Acrocanthosaurus and an Allosaurus at rest. Photo by the author.

Also of note is a children’s room on the lower level, featuring (sigh) a sandbox dig and some very helpful and enthusiastic volunteers. Indeed, children’s activities appear to be the Dinosaur Discovery Museum’s strong suit. A look at their website reveals that kid’s programs are scheduled every weekend, and special events like dinosaur ornament making and flashlight tours occur throughout the year.

Clearly, I was impressed by my visit to the Dinosaur Discovery Museum. It’s wonderful that an educational opportunity like this exists in a semi-rural community, something that would have been unheard of not so long ago (did I mention it’s free?). What’s more, the exhibit hall is a great resource for specialists interested in comparing a variety of theropods first-hand. If you ever find yourself in the area, this little museum is definitely worth a visit.