Start with History of the AMNH Fossil Halls – Part 1.

During his leadership of the American Museum of Natural History’s Department of Vertebrate Paleontology and later, the museum at large, Henry Osborn oversaw an unprecedented expansion of the institution’s paleontology exhibits. As fossils poured in from the Department’s international collecting expeditions, these displays expanded into five separate galleries on the museum’s fourth floor. During the first two decades of the 20th century, AMNH staff was installing newly prepared and mounted specimens every single year, and AMNH was the undisputed center of American vertebrate paleontology. The increasingly marginal role of descriptive natural history in the greater field of biology at this time made the scale of Osborn’s program all the more impressive.

Nevertheless, this golden age of fossil exhibits would not last forever. Osborn supported the expensive expeditions and monumental displays through his personal connections with wealthy benefactors. The combination of the Great Depression and Osborn’s death in 1933 all but eliminated this source of income, and the museum had to scale back its activities considerably. In 1942, the Department of Vertebrate Paleontology was dissolved. Paleontology work continued under the Department of Geology, but with only a fraction of its former staff and budget. 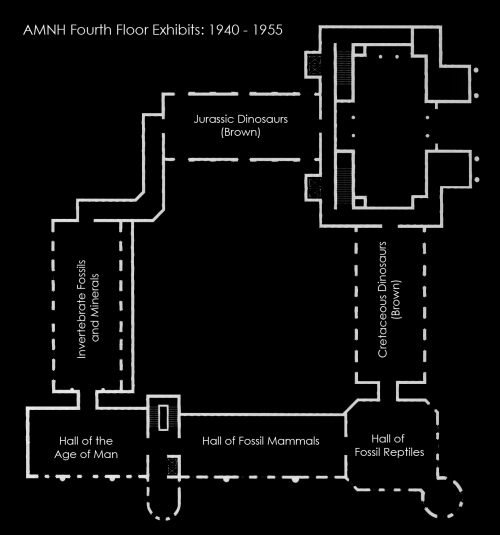 In the post-Osborn era, responsibility for the fourth floor exhibits deservedly transferred to Barnum Brown. Indeed, Brown’s adventures as a swashbuckling fossil hunter not only brought him personal fame, but made the museum’s world-class paleontology exhibits what they were. Of the 36 dinosaurs on display by 1939, no less than 27 had been discovered by Brown. Most of these iconic finds were made in his 20s and 30s, but Brown nevertheless remained at AMNH for most of his life. Even after officially retiring in 1943, Brown still frequented the museum, often giving spontaneous personal tours of the exhibits.

In 1932, the architectural firm Trowbridge and Livingston completed the 13th building in the AMNH complex. This meant that for the first time, the paleontology exhibits formed a complete circuit, an arrangement that persists to this day. Brown opted to spread the dinosaurs into two halls, making the new space the Jurassic Hall and converting the Osborn-era Great Hall of Dinosaurs into the Cretaceous Hall. Several existing fossil mounts had to be moved as a result, including the massive “Brontosaurus.”  Eyeballing the widths of the doorways and corridors separating the present day Hall of Saurischian Dinosaurs (formerly the Jurassic Hall) and Hall of Ornithiscian Dinosaurs (formerly the Cretaceous Hall and Great Hall of Dinosaurs), it’s difficult to imagine how museum staff could have moved the 66-foot sauropod in one piece. This photograph suggests that the skeleton was divided into several sections, which then had to be brought down the freight elevator on one side of museum and carted around to an elevator on the other side. This would be the third and final position for the “Brontosaurus” – even when the mount was updated  in 1995, preparators left the torso and legs in place. 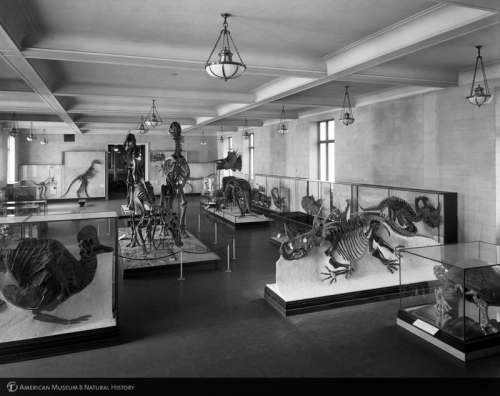 The 1930s and 40s saw a number of new dinosaur mounts added to the displays, nearly all of which were discovered by Brown. The new Jurassic Hall gained a Stegosaurus and Tenontosaurus (oddly, not a Jurassic dinosaur), and the Cretaceous Hall gained Brown’s astonishingly intact Centrosaurus, Corythosaurus, and Styracosaurus from Alberta.

Edwin Colbert joined AMNH in 1930 as Osborn’s assistant (he called this “a time of experiences and incidents,” whatever that means). Eventually rising to Curator of Vertebrate Paleontology, Colbert was one of only a handful of mid-century researchers studying dinosaurs. He is also notable for his public outreach — in collaboration with his partner, Margaret Colbert, he wrote more than 20 popular books about paleontology.

In 1953, Colbert worked with exhibit specialist Katharine Beneker to redesign the Jurassic and Cretaceous Halls. The Jurassic Hall received the most dramatic aesthetic makeover — windows were covered up to create a “black box” effect, while the dinosaur mounts were illuminated dramatically from above and below. The most significant addition to this space wasn’t a standing mount, but a trace fossil. Exhibit developers incorporated several slabs of sauropod tracks (collected at the Paluxy River in Texas by Roland T. Bird) into the central pedestal, as though left behind by the “Brontosaurus.” Cemented together, the slabs weighed 22 tons — apparently nobody expected that they would ever need to be moved. The fossil fish alcove, formerly part of the 1905 Hall of Fossil Reptiles, also found a home in this space.

In stark contrast to the Charles Knight oil and watercolor murals commissioned by Osborn, Colbert elected to decorate the Jurassic Hall with a series of understated chalk drawings. Joseph Guerry created the illustrations, which was then projected onto the walls and traced in chalk. The initial plan was to paint over the chalk outlines, but Colbert enjoyed the blackboard-like look and left them as they were. The exhibit team didn’t even add fixative, since it would have turned the lines an unpleasant yellow.

Architectural modifications to the Cretaceous Hall were minimal, although the standing dinosaur mounts were all clustered onto a single platform. Interestingly, both the National Museum of Natural History and the Peabody Museum of Natural History would arrange their dinosaurs in precisely the same way within the decade. While it’s possible that these museums were copying AMNH, this similarity is probably a reflection of the transition to more holistic natural history displays that was occurring in museums nationwide. Rather than displaying specimens individually, exhibit designers in the 1950s and 60s began to arrange them in meaningful ways — for example, grouping animals with a shared habitat. The Cretaceous Hall also gained some new specimens, including an array of Protoceratops skulls recovered during the Central Asiatic Expeditions. Signs and labels were updated with more approachable language, once again reflecting contemporary museum theory.

The Cretaceous —or Tyrannosaur— Hall opened in 1954. Photo courtesy of the AMNH Research Library.

Meanwhile, some of the oldest AMNH fossil exhibits were retired and replaced during this period. In 1961, the classic geology hall — the oldest exhibit on the fourth floor — became the research library and was closed to regular museum visitors. Its spiritual successor was the new Earth History exhibit, which replaced Osborn’s Hall of the Age of Man. Around the same time, George Gaylord Simpson curated what was colloquially known as the “Sloth Hall.” Occupying the space that was once the Hall of Fossil Reptiles, this exhibit featured ground sloths and glyptodonts, plus a sizable display demonstrating how fossils are collected and prepared. Only the Hall of Fossil Mammals remained ostensibly untouched during this wave of modernization.

The Hall of Advanced Mammals in 1982. Some sections were boarded up but remaining exhibits were virtually unchanged from the turn of the century. Photo courtesy of the AMNH Research Library.

The 1950s and 60s iterations of the AMNH fossil halls endured for 30 years, making them the longest-lasting versions to date. Displays like the “Brontosaurus” and Tyrannosaurus became immutable symbols for the institution, visited again and again by generations of museum-goers. However, time gradually took its toll. A large section of the Hall of Fossil Mammals was boarded up, since museum staff had removed so many specimens for study or conservation. Railings were eventually added to the Jurassic Hall, because it was too tempting for visitors to join the dinosaurs on the platform, Ke$ha-style. 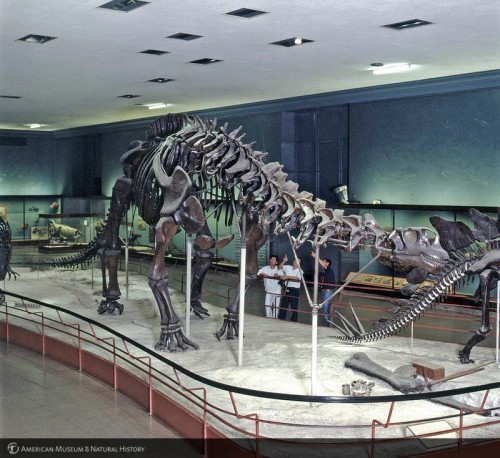 The Brontosaur Hall in 1988. Photo courtesy of the AMNH Research Library.

Most importantly, the exhibit content became increasingly out-of-date with each passing year. This obsolescence permeated nearly every aspect of the exhibits, from the discussion of the dinosaurs’ extinction to the drab, earth-tone aesthetics. However, the most visibly antiquated elements were the fossil mounts themselves. A new wave of dinosaur research demonstrated that these animals had been active and socially sophisticated, a far cry from the the coldblooded tail-draggers that populated the galleries. AMNH had once been the center of American paleontology, but by the late 1980s its dated displays were lagging far behind newer museums.

Between 1987 and 1995, Lowell Dingus coordinated a comprehensive, $44 million renovation of the AMNH fossil exhibits (previously discussed here and here). The original plan was to renovate only the Hall of Fossil Mammals, since it had remained largely unaltered since 1895. Within a year, however, the project had expanded to encompass all six halls on the fourth floor, telling the entire story of vertebrate evolution. Two primary goals originated very early in the planning process. First, the “walk through time” layout would be replaced with one rooted in phylogenetic classification. The cladistic methodology for tracing organisms’ evolutionary history became the central theme that unified the new exhibits. This required a fairly substantial reorganization of existing specimens. The mammals could remain in the same two halls, but the denizens of the Jurassic and Cretaceous halls had to be rearranged to feature Saurischian and Ornithiscian dinosaurs, respectively. Meanwhile, the research library moved to a new location to make way for the Hall of Vertebrate Origins.

The Hall of Advanced Mammals was the first renovated exhibit opened to the public. Photo by the author.

The second major goal was to restore the original architecture in each hall, ensuring that both the historic specimens and the spaces they occupied would come “as close to their original grandeur as possible” (Dingus 2006). In many cases original architecture elements — such as the molded ceilings — were still intact behind panels that had been installed over them. These features were painstakingly restored, or when necessary, recreated. Classic decorative elements, from the colonnades to the elegant chandeliers, were reintroduced. 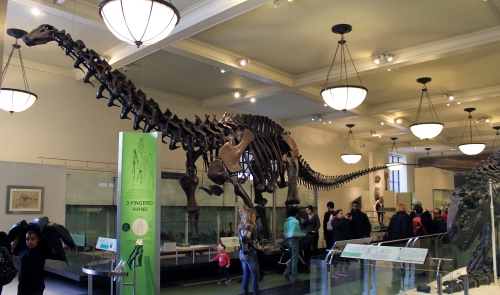 The updated Apatosaurus in the Hall of Saurischian Dinosaurs. Photo by the author.

The vast majority of the fossil mounts in the renovated exhibits had already been on display for years. Among the classic mounts, only the two most iconic displays were completely overhauled. The restoration of Apatosaurus (formerly “Brontosaurus“) took more than a year. A conservation team led by Jeanne Kelly worked from a temporary wooden scaffold, filling cracks in the aging fossils with epoxy and securing loose joints on the armature. The mount’s torso and legs remained in place throughout the process, but the neck and tail were dismantled and remounted by Phil Fraley’s exhibit company. In addition to a new head, the revised Apatosaurus gained several caudal and cervical vertebrae, extending its total length to 88 feet. Remounting the Tyrannosaurus rex was even more difficult, because the fossils were so fragile. Once again, Phil Fraley was responsible for disassembling and reposing the skeleton. The T. rex now sports a more accurate horizontal posture, and its weight is supported by steel cables extending from the ceiling.

The new fossil mounts are easily recognized by their dynamic poses. In the Hall of Vertebrate Origins, the amphibian “Buettneria” (now Koskinonodon) assumes a diving pose, while a Prestosuchus charges with its tail aloft. Among the dinosaurs, a new Deinonychus mount (assembled in part from previously-unidentified historic material) is posed in mid-leap. Finally, the dog-like Amphicyon chases the tiny antelope Ramoceros in the Hall of Advanced Mammals. 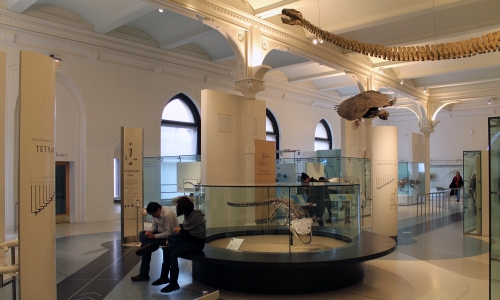 In the Hall of Vertebrate Origins, a new Koskinodon mount represents the vertebrates’ critical transition to terrestrial life. Photo by the author.

The AMNH fossil halls represent one of the most exhaustively complete fossil collections in the world, but these exhibits ultimately tell two stories. On one hand, we have the story represented by the fossils themselves. The exhibit is an extended genealogy, tracing our origins across 500 million years of deep time. On the other hand, we have the museum’s history, which highlights both the praiseworthy and the ugly sides of 20th century science. It reminds us where our society has been and where it needs to go. Both stories are relevant to each and every person passing through these halls, and laudably, the latest renovation highlights both.

5 responses to “History of the AMNH Fossil Halls – Part 2”