Between 1981 and 1990, the National Museum of Natural History carried out its second major overhaul of the east wing paleontology exhibits. Entitled “Fossils: The History of Life”, the new exhibit complex represented a significant departure from earlier iterations of this space. While the previous renovation arranged specimens according to taxonomy and curatorial specialties, “The History of Life” followed the evolutionary progression of fossil plants and animals through time. The new exhibits also differed from prior efforts in that they were not put together exclusively by curators. Instead, the design process was led by educators and exhibits specialists, who sought curatorial input at all stages. The result was a (comparably) more relatable and approachable paleontology exhibit, created with the museum’s core audience of laypeople in mind.

By 1987, four sections were completed: The Earliest Traces of Life, Conquest of the Land, Reptiles: Masters of the Land, and Mammals in the Limelight. Occupying halls 2, 3, and 4, these exhibits (along with the older Hall of Ice Age Mammals and the Rise of Man in Hall 6) told the complete story of the terrestrial fossil record. However, Hall 5 (the narrow space running parallel to the central dinosaur exhibit on its north side) was still vacant.

1987 map of planned additions to the “History of Life” exhibit complex, including the never-realized Changing Earth. Courtesy of the Smithsonian Institution Archives.

Going back to the 1977 theme statement that kicked off the History of Life renovations, the intent was always for Hall 5 to feature two exhibits: one on prehistoric sea life and another on the geological context for the fossil record. These ideas were fleshed out in a 1987 briefing packet that was distributed to potential donors. As the document explained, “it is in the undersea realm that the history of life is most abundantly documented,” and coverage of fossil marine life is therefore “critical” to visitors’ understanding of evolution through deep time. From the beginning, the “Life in the Ancient Seas” exhibit promised to feature a life-sized diorama of a Permian reef community, mounted skeletons suspended in life-like swimming poses, and an immersive underwater ambiance. Meanwhile, the proposed “Changing Earth” exhibit would “illuminate the entire story [told in the fossil halls] by looking at the ways geological processes have affected the course of evolution over millions of years.” A key feature was a “video disc time machine”, which was essentially a computer terminal where artwork reconstructing different time periods could be viewed.

Changing Earth was ultimately never built. Instead, the allocated space became a windowed fossil preparation lab, which would prove to be one of the most popular exhibits in the History of Life complex. Nevertheless, many of the ideas planned for Changing Earth would be revisited in the Geology, Gems, and Minerals hall, which opened in 1997. Life in the Ancient Seas did get funding, however, and with a budget of approximately $4 million, production of the exhibit was underway by early 1988. 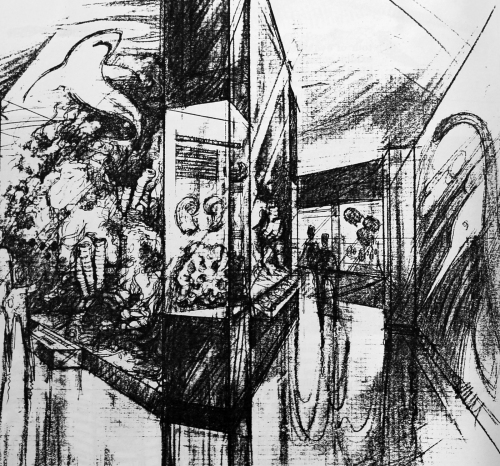 As with any large exhibit, Life in the Ancient Seas was made possible through the combined efforts of dozens of talented scientists, artists, and technicians. Like the rest of the History of Life complex, the Department of Exhibits generally initiated and produced the content, which the Department of Paleobiology then revised or approved. Linda Deck was the content specialist, steering the ship throughout the planning and production process. She selected specimens, chose the major storylines, and acted as a bridge between the curators and exhibits staff. Li Bailey and Steve Makovenyi were the designers, overseeing the exhibit’s aesthetics and making sure it functioned as a cohesive whole. Sue Voss was the lead writer of label copy.

The hall’s design revolved around two main ideas, one aesthetic and one pedagogical. Visually, the exhibit needed to “simulate the perspective of a scuba diver” (Deck 1992). Makovenyi and Bailey gave the hall a blue-green color palate, with a low, black-tiled ceiling. Shimmering lights projected on the floor contributed to the illusion of traveling through the underwater world. Meanwhile, the layout of the hall adhered strictly to the chronology of geologic time. As visitors traversed the space, archways and glass barriers emphasized the conceptual divisions between the Paleozoic, Mesozoic, and Cenozoic eras. 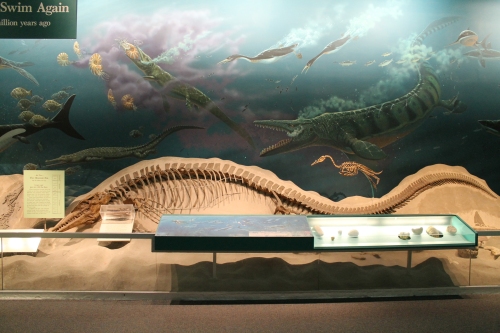 Tylosaurus and Hesperornis are classic NMNH mounts. Photo by the author. 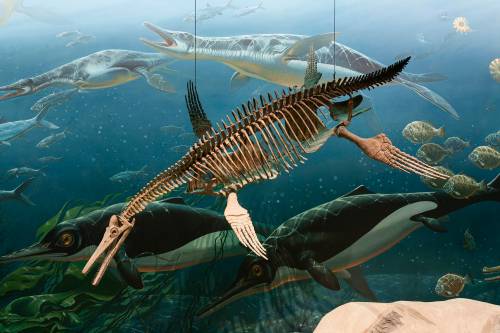 Life in the Ancient Seas featured over 1,000 specimens, most of which were invertebrates like trilobites, brachiopods, ammonites, and bivalves. Early lists of vertebrates earmarked for display were (as is typical) much longer than the final selection of twelve mounted skeletons – a walrus and a baleen whale were among the casualties. A few of the mounts, like the  ancestral whale Basilosaurus (USNM V 4675) and the sea lizard Tylosaurus (USNM V 8898), had already been on display for decades and needed only modest touch-ups for the new exhibit. Most of the vertebrate skeletons, however, were brand new. The Dolichorhynchops (USNM PAL 419645) was collected in Montana in 1977, and acquired in a trade with the Denver Museum of Nature and Science. Arnie Lewis prepared and assembled the mount in 1987. A Eurhinodelphis dolphin (USNM PAL 24477) from Maryland was mounted by contractor Constance Barut Rankin. Her work was so impressive that she earned a full-time position for her trouble. The sea cow Metaxytherium (USNM PAL 244477) was a very late addition, having been excavated in Florida during the 1988 field season.

Miocene dolphin and sea cow. Photo by the author.

A variety of created objects joined the real specimens in telling the story of marine life through time. Model Hybodus sharks swam near the ceiling, and a realistic papier-mâché seabed extended the length of the exhibit beneath the mounted skeletons (little did visitors know this “seabed” was fragile enough to be punched through if it was ever stepped on). The exhibit team decided early on that Life in the Ancient Seas would include an 11-foot high, life-sized diorama of a Permian reef, based on the Glass Mountains deposits in Texas. Smithsonian paleontologist G. Arthur Cooper spent years collecting and publishing on the immaculate fossils found in this region, so a reconstruction of the Permian near-shore ecosystem was an obvious choice. What’s more, there was already a man lined up for the job. Terry Chase of Missouri-based Chase Studios (who would later go on to create Phoenix the whale) had already built a Permian reef for the Petroleum Museum in Midland, Texas, and most of the same molds and designs could be re-used. Still, the NMNH diorama was a massive undertaking, featuring 100,000 unique models – some hand-sculpted and some cast in translucent resin or wax.

Phillip Anderson experimented with a variety of materials to create the shimmering of sunlight shining through water that appeared in the diorama and at the exhibit’s two main entrances. As it turns out, nothing looks as good as actual light penetrating actual water. To accomplish the effect, Anderson rigged a piston cylinder to continuously produce waves in a shoebox-sized plexiglass container of water. A quartz light shone through the container and projected the pattern onto the floors and walls.

The Permian reef at the Midland Petroleum Museum. I stupidly never took a picture of the NMNH version. Source

Life in the Ancient Seas opened in May 1990. In a Washington Post review, Hank Burchard raved about the ocean-themed design and especially Voss’s text, stating that “every museum text writer in town should study her style.” For the next 23 years, Life in the Ancient seas stood out as the gem among the east wing fossil exhibits. It was more colorful, easier to navigate, and generally more inviting than the other History of Life galleries. The theatrical label copy was arguably over the top (“Act One had been a bottom-dweller’s ballet, Act Two would be a swimmer’s spectacle”), but the exhibit as a whole plainly succeeded in presenting the story of evolution, adaptation, and extinction in an appealing and attractive way. Over the years, there were a few changes: the shimmering lights were shut off, a charming clay-mation video about the end-Cretaceous food chain collapse was removed, and the Dunkleosteus skull and Basilosaurus skeleton were relocated to the Ocean Hall (the latter was replaced with a cast of the related whale Zygorhiza). Indeed, the opening of the similarly-themed but far larger Ocean Hall in 2008 overshadowed Life in the Ancient Seas, and made many of its displays redundant. Although it was the best part of the History of Life complex, Life in the Ancient Seas was also the shortest lived. It was the last section to open, and in 2013, it was the first section to close.

Those familiar with the exhibit will have surely noticed that I have yet to discuss the beautiful 122-foot mural painted by Ely Kish. Running the entire length of the exhibit, this amazing artwork outclasses even the famous “Age of Reptiles” at the Yale Peabody Museum in terms of scale and number of subjects depicted. This monumental accomplishment will be the subject of the next post – stay tuned!

Telfer, A. 2013. Goodbye to Life in the Ancient Seas Exhibit. Digging the Fossil Record: Paleobiology at the Smithsonian. http://nmnh.typepad.com/smithsonian_fossils/2013/11/ancient-seas.html

3 responses to “Revisting the Ancient Seas”