Acrocanthosaurus, the Terror of the South

Acrocanthosaurus at the North Carolina Museum of Natural Science. Photo by the author.

Following yesterday’s travelogue about the North Carolina Museum of Natural Science (NCSM), I thought I’d go into a little more depth about the museum’s star fossil. One of only five Acrocanthosaurus specimens ever found, NCSM 14345 is the most complete and the only one on public display. The mounted skeleton has been at the Raleigh museum since 2000. Among other things, its story highlights the challenging relationship between academic paleontologists and the private fossil trade.

Despite its current home in North Carolina, this Acrocanthosaurus hails from the town of Idabel in southeast Oklahoma, more than a thousand miles away. Avocational fossil hunters Cephis Hall and Sid Love (both now deceased) discovered the skeleton in 1983. After making an arrangement with the landowner, the pair spent the next three years carefully excavating the find.

The Acrocanthosaurus was recovered from the early to mid Cretaceous rocks of the Antlers Formation. Found in a deposit of fine sandstone and dark mudstone alongside lots of lignitized wood, the animal’s final resting place was probably a stagnant swamp or pond. Additional evidence for the depositional environment comes from the way the bones are preserved. They contain a great deal of pyrite, and were encrusted with dense concretions of calcium carbonate. Both of these minerals are formed by bacteria blooms in low-oxygen locales, such as the mud at the bottom of a swamp. Gouges in the skull, ribs, and foot indicate scavengers – crocodiles and possibly other Acrocanthosaurus – were feeding on the carcass before it was buried.

All told, the find included a complete skull (the only one of its kind), the pelvis and sacral vertebrae, both arms and shoulder girdles, the right leg, and parts of the rib cage and tail. Paleontologist Richard Cifelli of the Sam Noble Museum in Norman, Oklahoma became aware of the discovery in 1987. Cifelli initially hoped that the museum could acquire the specimen for study and safekeeping, but Hall and Love’s asking price was beyond their means. Instead, Hall and Love loaned the fossils to the University of Texas. They were unsatisfied with this arrangement, however, and drove down to Austin to retrieve their dinosaur (the details of this event are apparently contentious). Hall and Love then sold the fossils to Geological Enterprises, a for-profit outfit based in Ardmore, Oklahoma, for $225,000 plus the promise of a cast once the prep work was completed. Geological Enterprises founder A. Allen Graffham gave the specimen the nickname “Fran,” after his wife.

The meticulously reconstructed Acrocanthosaurus skull. Photo by the author.

The calcium carbonate concretions and heavy pyrite content made the Acrocanthosaurus a particularly challenging fossil to prepare. The concretions are like natural cement and are very difficult to remove without damaging the bones. Meanwhile, pyrite breaks down into sulfur when exposed to oxygen and humidity, which can cause bones to crumble. In 1991, Graffham outsourced the preparation job to the Black Hills Institute in Hill City, South Dakota. Terry Wentz led the preparation project at BHI, which was reportedly one of the most challenging assignments of his career. The concretions encrusting the bones were so dense that they often had to be ground off, rather than chipped. This process could take several hours just to remove a few millimeters of calcium carbonate. To make matters worse, removing pyrite releases acidic particulates into the air. Preparators had to wear respirators and the bones had to be prepared in vacuum boxes.

The most daunting part of the project was reconstructing the specimen’s beautiful and intact skull. Although virtually complete, the skull was found crushed flat. Everyone involved agreed that the skull would be more informative and more impressive if it could be reinflated, but that was easier said then done. Over a year of work went into carefully separating the individual skull bones and reassembling them into their life position.

After five years of what was probably one of the most difficult fossil prep jobs ever attempted, the Acrocanthosaurus was ready to be sold. However, Graffham initially had trouble finding a buyer. There were interested parties in Japan, but he reportedly did not want the fossils to leave the United States.

On October 4, 1997, another well-preserved theropod skeleton went up for auction at Sotheby’s in New York. Sue – the most complete Tyrannosaurus ever found – was already legendary thanks to the protracted legal battle over the fossils. Now that the one-of-a-kind skeleton was being sold at a high profile auction, paleontologists feared that it would disappear into the hands of a private collector. On the night of the auction, most of the museums and other public repositories in the running were outbid within minutes. The North Carolina Museum of Natural Science appeared to be the only museum left after the price topped $5 million, and so the hopes of the paleontological community rested on their shoulders. NCSM dropped out at $7.2 million, and moments later Richard Gray, a veteran of art auctions, won Sue on behalf of a mysterious client. Happily, that client turned out to be the Field Museum (with financial backing from McDonald’s and Disney), and so Sue ended up in a public repository after all.

The Acrocanthosaurus and its sauropod companion can be seen from the ground and from a balcony. Photo by the author.

Still, NCSM had been willing to stake an enormous amount of money on a name brand dinosaur, and they weren’t about to give up. Two months after the Sue auction, the Friends of the North Carolina Museum of Natural Sciences bought the Acrocanthosaurus from Graffham’s company for $3 million. BHI prepared the mount, which debuted along with the rest of the museum’s new building on April 7, 2000. It may not be coincidental that this was just one month before the mounted skeleton of Sue was unveiled in Chicago.

The Acrocanthosaurus occupies a well-lit, circular atrium on the museum’s third floor. Visible both from the ground and from a balcony, the mount is accompanied by a rather goofy-looking sauropod statue. Model pterosaurs circle overhead on a rotating arm, and recreations of theropod and sauropod tracks from Dinosaur State Park in Paluxy, Texas can be seen throughout the room. The original skull is on display in a case outside the atrium.

Sadly, pyrite deterioration has continued to ravage the delicate fossils. Several of the original bones once included in the NCSM mount have been retired to the collections for safekeeping. As of this year, only the arms, right foot, and vertebrae appear to be original material. The rest have been replaced with casts.

Exhibit signs have also changed since the 2000 debut. NCSM exhibits staff learned from surveys that 80% of visitors thought the dinosaur on display was a T. rex, and plenty more assumed the whole skeleton was a replica. In response, most of the signage was redesigned. The displays now highlight the differences between “Acro” and T. rex, and highlight the exceptional rarity of the museum’s Acrocanthosaurus specimen.

A number of NCSM 14345 casts are on display at museums throughout North America, including the Virginia Museum of Natural History, the Houston Museum of Nature and Science, and the Kenosha Public Museum. As promised, Hall and Love were awarded a complete cast of the skeleton,  but without the means to assemble or display it, the replica sat in storage for several years. Eventually, local third and fourth graders successfully raised the $150,000 needed to display the cast at the Museum of the Red River in Idabel. 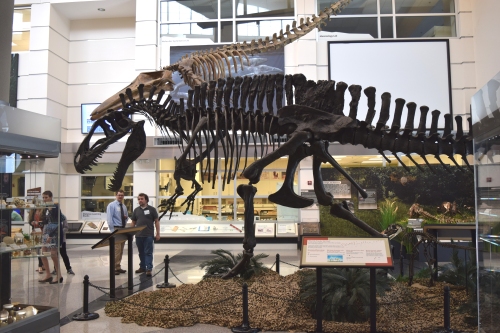 Acrocanthosaurus cast at the Virginia Museum of Natural History. Photo by the author.

Acrocanthosaurus cast at the Houston Museum of Nature and Science. Photo by the author.

Fossils are precious remains of real organisms, clues about ecosystems from long ago and the making of the world as we know it today. In an ideal world, all significant fossils would, from the moment of their discovery, be accessioned and held in a public collection at a museum or university. A fossil sitting on somebody’s mantelpiece or waiting to be sold at auction is doing nothing to grow our collective knowledge. However, public institutions don’t have the resources to find and excavate every fossil, and in the United States fossils found on private land belong to the landowners. That means that, for better or worse, there is a thriving commercial market for rare fossils.

A plurality of paleontologists do not engage with fossil dealers for ethical reasons. Indeed, even if they wanted to buy rare specimens, academic institutions can seldom match the prices individual collectors are willing to pay. Museums don’t usually have $3 million sitting around. That kind of money could fund a whole research team for years. As such, we’re left with a Catch-22. Paleontologists want important fossils to be in museums where they can be seen and studied by everyone. But if those fossils are in private hands, buying them would support and legitimize the industry that is also keeping fossils out of public collections. If there was an easy solution, it would have been worked out by now.

Nevertheless, serendipity occasionally strikes. This seems to have been the case with the Acrocanthosaurus. News about Sue generated interest in buying a name-brand dinosaur, and donors were willing to put up the money to get the specimen for NCSM. The skeleton is now in a public collection, at a free museum, no less. Meanwhile, the collectors were well compensated for their considerable investment. It’s hard to chalk that up as anything but a win, all around.

Carpenter, K. 2016. Acrocanthosaurus Inside and Out. Norman, OK: University of Oklahoma Press.

du Lac, J.F. 2014. The T. rex that got away: Smithsonian’s quest for Sue ends with different dinosaur. The Washington Post.

Eddy, D.R. and Clarke, J.A. 2011. New Information on the Cranial Anatomy of Acrocanthosaurus atokensis and Its Implications for the Phylogeny of Allosauroidea (Dinosauria: Theropoda). PLoS ONE 6:3:e17932.

6 responses to “Acrocanthosaurus, the Terror of the South”