Read the Marsh Dinosaurs, Part I or start the Extinct Monsters series from the beginning.

During the first decade of the 20th century, the United States National Museum paleontology department was located in an offsite building in northwest Washington, DC. It was here that preparators Charles Gilmore, Norman Boss, and James Gidley slowly but surely worked through the literal trainloads of fossil specimens O.C. Marsh had acquired for the United States Geological Survey. The Marsh Collection included unknown thousands of specimens, many of them holotypes, and there was no shortage of gorgeous display-caliber material. Even after the “condemnation of worthless material” Gilmore and his team quickly filled the available exhibit space in the Arts and Industries Building with mounted skeletons.

With no more display space and plenty more fossils, it was fortunate that the USNM moved to a new, larger building in 1910. In this iconic, green-domed building (now the National Museum of Natural History), the paleontology department received newly furnished collections spaces and the entire east wing to fill with display specimens. The evocatively titled Hall of Extinct Monsters provided a new home for the mounted skeletons already constructed for the old exhibit, as well as plenty of room for new displays. 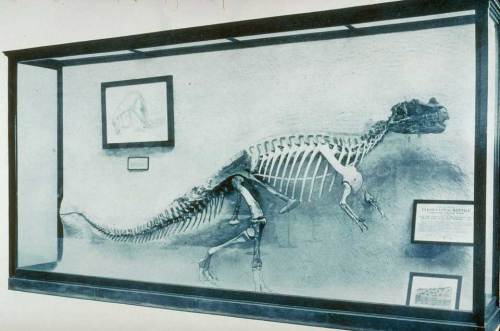 The Ceratosaurus nasicornis holotype was originally housed in a glass case. Image courtesy of the Linda Hall Library. 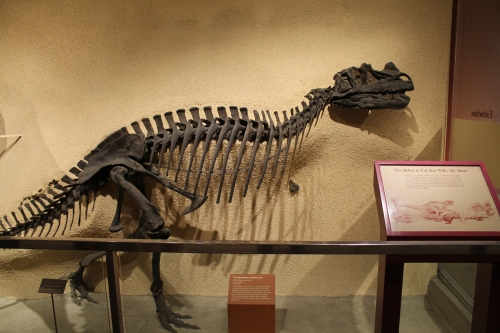 The delicate arms of Ceratosaurus were removed several years prior to the hall’s closing. Photo by the author.

One of the first new additions was the type specimen of Ceratosaurus nasicornis (USNM 4735), mounted in relief. Marshall Felch led the excavation of this specimen in 1883 at a quarry near Cañon City, Colorado. The nearly complete skeleton received a cursory description from Marsh upon its discovery, but it was Gilmore who described it properly in 1920, ten years after it was put on display. When it was introduced to the Hall of Extinct Monsters, this was the only Ceratosaurus specimen yet found, making the mount a USNM exclusive. The skeleton was originally displayed in a glass case, but during the 1963 renovation it was placed in a more open setting.

Even today, Ceratosaurus is only known from a handful of specimens. For this reason, the original Ceratosaurus fossils will not be returning when the current renovation is completed in 2019. The new hall will instead feature a three-dimensional, standing cast of this skeleton. The original fossils are now in the museum’s collections, available for proper study for the first time in over a century.

In 1912, two mounted skeletons of Camptosaurus, one large (USNM 4282) and one small (USNM 2210), were introduced to the Hall of Extinct Monsters. William Read excavated both specimens at Quarry 13 in the Como region of Wyoming a quarter of a century earlier. Representing the first-ever mounted skeletons of Camptosaurus, these specimens have had a rather complex taxonomical history. Marsh initially described both specimens as Camptosaurus nanus, a new species within the genus Camptosaurus (the type species was Camptosaurus dispar, also coined by Marsh). After the fossils were acquired by the USNM, Gilmore re-described the larger individual as a new species, Camptosaurus browni. This designation remained until the 1980s, when Peter Galton and H.P. Powell determined that C. nanus and C. browni were actually both growth stages of C. dispar.

Regardless of what they are called, both specimens were remarkably well-preserved and reasonably complete. Most of the skeletal elements of the larger Camptosaurus came from a single individual that was found articulated in situ. However, some of the cervical vertebrae came from another specimen from the same quarry, and the skull, pubis, and some of the ribs were reconstructed. Of particular interest is the right ilium, which has been punctured all the way through by a force delivered from above. Gilmore postulated that “the position of the wounds suggest…that this individual was a female who might have received the injuries during copulation.” The smaller “C. nanus” was also found mostly complete, but two metatarsals came from a different individual and the skull and left forelimb were sculpted. 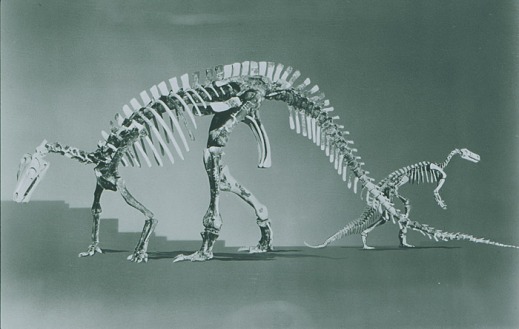 The original pair of Camptosaurus mounts. Image from Backyard Dinosaurs.

Gilmore supervised the creation of both mounts, and constructed the larger individual himself. Norman Boss took the lead on the smaller specimen. As with the other dinosaur skeletons, the mount was centered on an inch-thick steel rod bent to conform to the shape of the vertebral column. Bolts were drilled directly into the vertebrae to attach them to the armature, and the vertebral foramina were filled with liberal amounts of plaster to secure them to the rod. A similar process was used to assemble each of the limbs, and the ribs were supported by a wire cage.

Gilmore aimed to correct many specifics of Marsh’s  original illustrated reconstruction of Camptosaurus. To start, he shortened the presacral region to make a more compact torso. Marsh had also inexplicably illustrated Camptosaurus with lumbar vertebrae (a characteristic exclusive to mammals), which Gilmore corrected. Finally, Marsh had reconstructed the animal as an obligate biped, but Gilmore  determined that “Camptosaurus used the quadrupedal mode of progression more frequently than any other known member of Ornithopoda.” Accordingly, the larger Camptosaurus mount was posed on all fours. The completed Camptosaurus mounts were placed together in a freestanding glass case toward the rear of the Hall of Extinct Monsters. In 1962 the pair was moved to the left of the Diplodocus on the central pedestal of the redesigned exhibit. During the 1981 renovation they were moved a few feet back, so that they were alongside the sauropod’s tail. 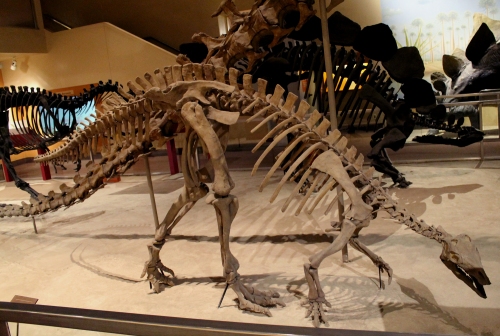 This cast replaced the original Camptosaurus mounts in 2010. Photo by the author.

The retired plaster skulls of the original Camptosaurus mounts. Photo by the author.

Both Camptosaurus skeletons taken off exhibit in 2010 and replaced with a cast of the adult. The delicate fossils, which had suffered from considerable wear and tear over the past hundred years, were stabilized and stored individually for their protection. The new mount has a number of upgrades to reflect our improved understanding of dinosaur anatomy. The arms are closer together and the palms face inward, because the pronated (palms down) hands on Gilmore’s version have been determined to be a physical impossibility. The new mount also features a completely different skull. The rectangular model skull used on the original mount was based on Iguanodon, but new discoveries show that the skull of Camptosaurus was more triangular in shape. Both the adult and juvenile Camptosaurus will appear in the new National Fossil Hall.

The Smithsonian’s first Stegosaurus exhibit was a life-sized model built for the 1904 World’s Fair in St. Louis. This model found its way into the Hall of Extinct Monsters in 1910. In 1913, the model was joined by a mounted Stegosaurus skeleton found at the same Cañon City quarry as the Ceratosaurus. A third Stegosaurus, the holotype of S. stenops, was introduced in 1918. Lovingly called the “roadkill” Stegosaurus, USNM 4934 is remarkable in part because it was found completely articulated. In fact, before its 1886 discovery by Marshall Felch, it was unknown exactly how the animal’s plates were positioned on its back. 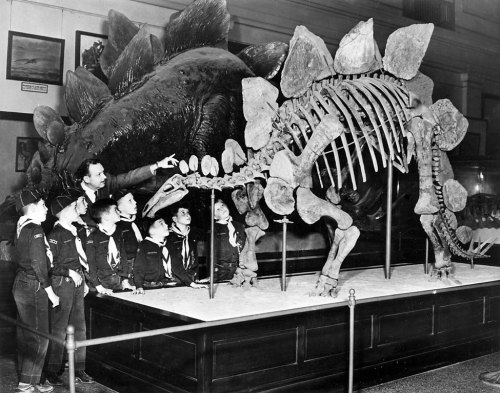 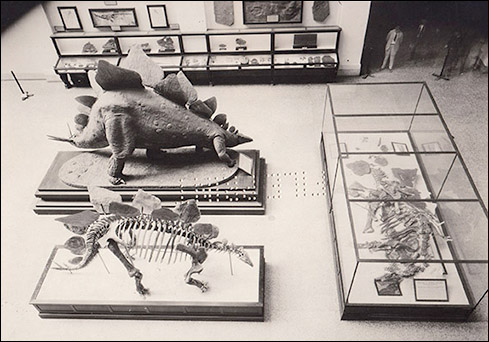 Stegosaurus model, standing mount, and “roadkill” on display in the Hall of Extinct Monsters. Source

All three Stegosaurus displays were moved in 1963 and 1981. In Fossils: The History of Life, the Stegosaurus skeletons were positioned flanking the Diplodocus in the central display area, with the standing mount on the right and the roadkill skeleton on the left. The model Stegosaurus stood opposite the mount. Just like the Triceratops and Camptosaurus, many decades on display took their toll on the standing Stegosaurus, so in 2003 the fossils were removed from the exhibit. Dismantling the Stegosaurus was particularly challenging because of the large amount of plaster applied by the mount’s creators. In some cases the plaster infill had to be removed with hand tools, which put further pressure on the fossils. Additionally, the rod supporting the backbone had been threaded right through each of the vertebrae, and was extremely difficult to remove. A casted Stegosaurus mount in a more active pose was returned to the exhibit in 2004. 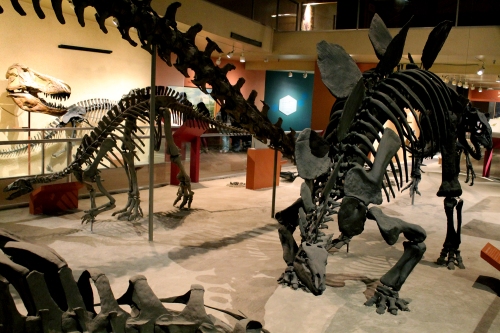 Casts of Stegosaurus and Camptosaurus. Photo by the author. 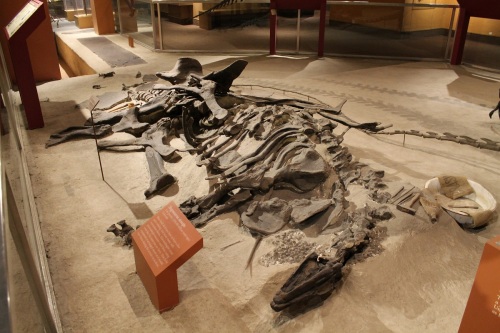 “Roadkill” Stegosaurus in 2014. Photo by the author.

After 110 years on display at the Smithsonian, the model Stegosaurus has been donated to the Museum of the Earth in Ithaca. The roadkill Stegosaurus, however, will feature prominently in the new National Fossil Hall, mounted upright on the wall by the exhibit’s secondary entrance. The 2004 Stegosaurus cast had a number of anatomical issues and will not be returning – instead, it will be replaced by an updated cast made from the same original fossils.

The Marsh dinosaurs have been of critical importance in our understanding of the Mesozoic world, but at this point these fossils are historic artifacts as well. When they were uncovered, the American civil war was still a recent memory, and railroads had only recently extended to the western United States. Before the first world war they had been assembled into mounts, and for more than a century these fossils have been mesmerizing and inspiring millions of visitors. Several of these mounts, including the Triceratops, Ceratosaurus and Camptosaurus, were the first reconstructions of these species to ever appear in the public realm, and therefore defined popular interpretations that have lasted for generations. Some visitors may lament that many of the original specimens have been recently been replaced with replicas, but the fact is that these are irreplaceable and invaluable national treasures. They inform us of our culture, and our dedication to expanding knowledge and our rich natural history. We only get one chance with these fossils, and that is why the absolute best care must be taken to preserve them for future generations.

Gilmore, C.W. 1912 “The Mounted Skeletons of Camptosaurus in the United States National Musuem.” Proceedings of the US National Museum 14:1878.