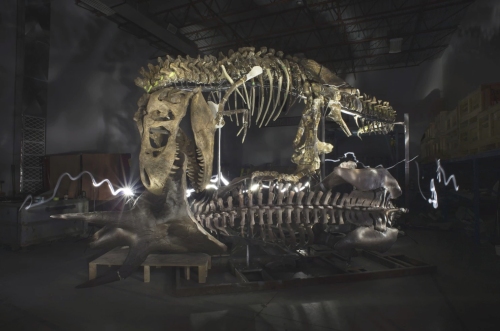 The Nation’s T. rex was temporarily assembled in the RCI workshop for inspection by Smithsonian staff. Source

Yesterday, a press embargo lifted and the world got it’s first look at the pose the Nation’s T. rex will assume in the new fossil hall at the National Museum of Natural History. I don’t have much to add to the solid coverage at The Washington Post, NPR, and Smithsonian Magazine except holy crap, that’s awesome.

The photo above (by Nikki Kahn of The Washington Post) was taken when Smithsonian staff visited the Research Casting International workshop to inspect the mount’s progress. Located outside of Toronto, RCI is the industry leader in the art of creating mounted fossil skeletons, and their work is on display in museums all over the world. The Nation’s T. rex is one of 52 mounts the company will create for NMNH over the next three years.

Dr. Carrano gestures toward the awesomeness behind him. Source

The Nation’s T. rex (also known as Wankel Rex) is new to NMNH, but it is not a new specimen. It was discovered by Montana rancher Kathy Wankel in 1988 on land owned by the Army Corps of Engineers. The skeleton, which was for a time the most complete Tyrannosaurus known, was held in trust at the Museum of the Rockies until last April, when the Corps loaned the specimen to the Smithsonian for the next 50 years. This is the first time the original fossils have been displayed in a standing mount, but RCI has been producing casts of the specimen for years. Examples can be seen at the Great North Museum, the Royal Ontario Museum, the Perot Museum of Nature and Science, and even the Google Campus.

The Smithsonian team inspecting every inch of the 2,000 pound mount included Curator of Dinosauria Matt Carrano, Exhibit Project Manager Siobhan Starrs, and Preparator Steve Jabo. The violent scene, with the Tyrannosaurus preparing to decapitate its Triceratops prey, was first suggested by Carrano over two years ago. The inspiration came from research by Denver Fowler and colleagues, which proposed that Tyrannosaurus regularly dismembered Triceratops by pulling the head off by the frill. The dynamic pose sets the Nation’s T. rex apart from the more “regal” stances other museums have chosen for their Tyrannosaurus mounts, and also reminds visitors that this animal was a living, acting being within its environment.

The exhibit team used a 3-D printed model of the skeleton to plan the pose. Source

The tyrant king’s prey is none other than a cast of Hatcher, NMNH’s resident Triceratops. This composite skeleton was the first mounted Triceratops ever exhibited, and it has been on display in one form or another since 1905. An updated reproduction of Hatcher can be seen right now in The Last American Dinosaurs, but apparently this will be its last hurrah. As Carrano put it, “Hatcher’s done its duty.” Even relegated to the role of food, however, Hatcher is still an impressive beast. The skeleton is nearly as long as the Nation’s T. rex, and noticeably bigger than the Triceratops mounts at other major U.S. museums.

Poor Hatcher knows nothing of his imminent demise at the claws of a 38-foot murderbird. Photo by the author.

The NMNH team had a few notes for RCI, both for the sake of accuracy and the sake of the exhibit. Carrano requested that the fibula be rotated slightly, while Starrs emphasized that the tail should be at least 10 feet off the ground, to prevent over-enthusiastic visitors from grabbing at it. The workshop visit was also an opportunity to explore how the mount would look among the other denizens of the National Fossil Hall. Hatcher and the Nation’s T. rex will be sharing space on the Creataceous platform with Edmontosaurus, Thescelosaurus, and the crocodile relative Champsosaurus, among others. Working out dynamic poses that also keep key lines of sight open is no easy task, and the gallery space needs to be planned down to the inch.

As is now industry standard, RCI’s armature is made up of intricate steel cradles that are custom fitted to hold each of the 150 real fossils in place. Unlike many historic mounts, no holes have been drilled in the bones and none of the delicate fossils are supporting the structure’s weight. Most bones can be removed individually, and with the right equipment, the entire mount can be assembled in just a few hours. As such, we can rest assured that this display will not only be incredibly cool, but the authentic 66 million-year-old fossils will be as safe as they could possibly be while on view for 7 million visitors per year.