It’s time to revisit my sporadic series on organizational and interpretive approaches in large-scale paleontology exhibits. Check out the posts below if you’d like to catch up.

Today’s topic is immersive exhibits – walk-through artificial environments that realistically simulate the prehistoric world. There are plenty of examples, and notably most have been built in the last 30 years. The Cincinnati Museum Center has a reconstruction of the Ohio Valley during the Pleistocene. The centerpiece at the Sternberg Museum of Natural History is an indoor forest presided over by an animatronic Tyrannosaurus rex. Probably the most dramatic example is the DinoSphere at the Children’s Museum of Indianapolis. Here, a repurposed Imax theater contains a number of dynamically posed dinosaur skeletons standing among rocks and trees. The surround sound system provides a constant soundtrack of animal calls, while the projection screen shows the sky at different times of day on a 22-minute cycle. There are even periodic storms, complete with flashing lights and booming thunder.

Stan and Bucky  harass a Triceratops in the DinoSphere.

Exhibits like the DinoSphere and its kin are frequently derided as sensationalism with little educational value. These multi-million dollar special effects shows (which sometimes do not contain any genuine specimens at all) are plainly inspired by the successes of theme parks, and it’s easy to dismiss them as crass efforts to draw crowds with flashy gimmicks. Surely these exhibits are nothing more than misguided attempts to turn museums into entertainment, learning opportunities be damned?

Well, it depends. The role of spectacle in museums is a complex one, and arguably one that is impossible to decouple from the core identity of these institutions.  Going back to the enlightenment-era cabinets of curiosities from which modern natural history museums emerged, the public side of museums has always been about showing off the biggest, the rarest, or the most expensive. And this sensationalist modus operandi has often been reflected in the spaces where specimens are displayed. The Greco-Roman architecture of classic exhibit halls, for example, is no less artificial than the DinoSphere’s indoor thunderstorms, and serves pretty much the same purpose. 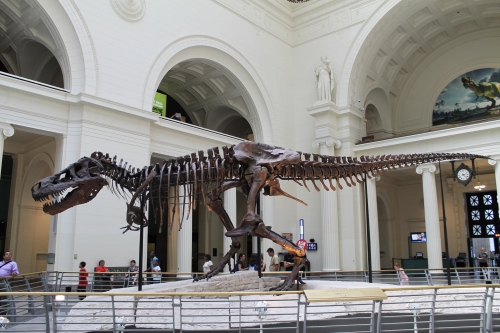 The neoclassical aesthetic of the Field Museum’s great was designed to impress – and is no less of a fabricated experience then the DinoSphere above. Photo by the author.

While spectacle in museums is nothing new, neither is its complicated relationship with education. Arresting displays have long been leveraged to imbue specimens with informative context. Take habitat dioramas populated by taxidermy animals, a longstanding staple of natural history museums. These little worlds behind glass first became popular in the mid 19th century, and were almost immediately controversial among museum workers. Paradoxically, dioramas provided visitors with a fuller appreciation of the ecosystems the animals lived in, but only by wrapping the specimens in a layer of theatrical artifice. The immersive fossil exhibits that have cropped up over the last few decades are essentially habitat dioramas on a larger scale, and exhibit designers are still wresting with the same issues their forebears did a century and a half ago. Which is more important in the context of public exhibits – an informative and meaningful narrative, or authenticity?

For me, spectacle and artifice are fine, even welcome, so long as they serve a purpose. In some cases, the spectacle exists to inform (as in a habitat diorama), in other cases the spectacle itself is the attraction. The robotic T. rex at the Natural History Museum in London and the neanderthal photo booth at the National Museum of Natural History come to mind as examples of the latter – they’re entertaining, but don’t facilitate any further reflection or inquiry. When implemented in a thoughtful and deliberate way, however, spectacle can be a powerful element in a museum educator’s toolkit.

By design, the first big skeleton visitors see in Dinosaurs in Their Time isn’t a dinosaur – it’s the phytosaur Redondasaurus. Photo by the author.

Let’s look at one example of a habitat immersion exhibit that uses showy reconstructed environments to maximize its educational potential. Two years and $36 million in the making, “Dinosaurs in Their Time” at the Carnegie Museum of Natural History is, in my opinion, one of the absolute best paleontology exhibits in the world*. Whether you’re considering the scope and quality of the specimens on display, the aesthetics and layout, or the interpretive approach,  Dinosaurs in Their Time is a benchmark in natural history exhibit design. You can follow along with this nifty interactive map.

*To be absolutely fair, Dinosaurs in Their Time is focused exclusively on the Mesozoic, which makes it difficult to compare to larger exhibits that cover the entire history of life on Earth.

What makes Dinosaurs in Their Time so great? Let’s start by considering the layout. The new exhibit more than doubles the square footage of the old Carnegie dinosaur hall, and much of the interior is actually a former courtyard (incidentally, this reuse of an existing space helped the exhibit earn its LEED certification). This makes the gallery spacious and airy, with a high ceiling and  plenty of natural lighting. The exhibit is arranged chronologically, starting in the Triassic and ending in the Cretaceous, but there is plenty of space in which to roam. In fact, the pathway forms a sort of figure eight around the Apatosaurus and Diplodocus in the Jurassic zone and the Tyrannosaurus pair in the Cretaceous. This cyclical organization allows, if not encourages, visitors to view specimens from multiple perspectives, and lets each person traverse the exhibit at their own pace. It’s especially nice that the sauropods have enough room to breathe – too often, these immense skeletons are relegated to cramped quarters where it’s impossible to see them all at once.

Visitors can walk all the way around Apatosaurus and Diplodocus, and even view them from above. Photo by the author.

The open spaces and clear sight lines are nicely complemented by the reconstructed rocks and foliage that fill the exhibit, giving it a proper outdoor feel. Importantly, the flora isn’t just for show – it’s a critical component of the interpretation. “We’ve painstaking recreated the worlds of the dinosaurs,” curator Matt Lamanna explains in a Carnegie Magazine interview, “everything that is displayed together actually lived together.” One of the key themes in Dinosaurs in Their Time is that dinosaurs were but one part of rich ecosystems, which were just as complex as those of today. These animals shaped and were shaped by the world around them, and there is far more to paleontology than the pageant show of toothy monsters that many visitors have come to expect. Indeed, it’s more akin to reconstructing entire worlds.

The plurality of “worlds” is important, because Dinosaurs in Their Time also emphasizes the nigh-unfathomable time span of the Mesozoic. Over 185 million years, countless communities of organisms came and went, and once again the immersive aesthetic of the exhibit helps convey this. While the horsetail swamp of the Triassic area almost looks like an alien world, the Cretaceous is populated by flowers and deciduous trees much like those of today. In this exhibit, the fossil specimens aren’t in a neutral environment – the space itself is part of the narrative. 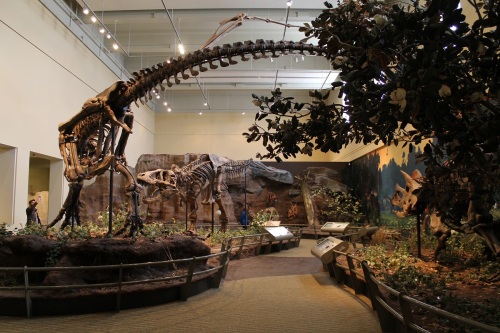 Tyrannosaurus and Triceratops mounts stand among flowers and magnolias. Photo by the author.

The habitat immersion approach comes with yet another plus: it encourages exploration. From a tiny swimming Hyphalosaurus under the waterline of an artificial pond to a Rhamphorhynchus halfway up a tree, visitors are constantly rewarded for looking high and low. As Lamanna explains, “many visitors are repeat visitors, so we wanted to give them something new to discover every time they come back.” This is particularly beneficial for younger visitors. Rather than barreling through the exhibit in minutes, kids are encouraged to look for tiny details and learn things along the way.

Finally, the computer terminals throughout Dinosaurs in Their Time merit some discussion because they embody the same multi-tiered educational approach as the physical space around them. Dinosaurs in Their Time actually tells several stories simultaneously: there’s the ecology story, the deep time story, the history of the specimens on display, and even a meta-story of how the new exhibit was put together. Most visitors won’t be interested in every narrative, nor should they be. Rather than filling the walls with a dizzying array of signage, the exhibit designers consolidated the various narratives into space-efficient interactives. Visitors can choose which information they would like to see, and craft their experience in the exhibit to their tastes. This is technology used intelligently and purposefully, and something I hope to see other exhibits emulate in the future. 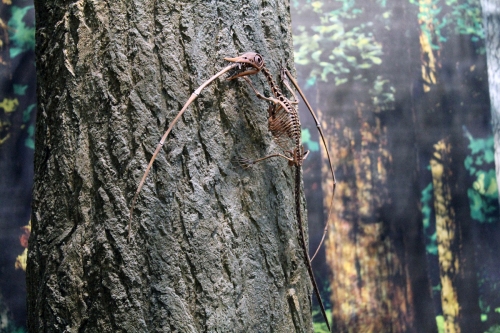 Sharp-eyed visitors are rewarded with hidden specimens, like this Rhamphorhynchus halfway up a tree. Photo by the author.

The purpose of any exhibit structure is to provide meaning and context for objects – to help visitors see them as more than neat things to look at. It’s the museum’s job to give visitors the intellectual tools to contextualize displayed objects in a more sophisticated way. Spectacle is one way to achieve that goal, and Dinosaurs in Their Time is a stellar example.

Love, S. (1997). Curators as Agents of Change: An Insect Zoo for the Nineties. Exhibiting Dilemmas: Issues of Representation at the Smithsonian. Washington, DC: Smithsonian Institution Press.