I started this blog in December 2010, and if any occasion called for a bit of reflection on why I started writing here and how it turned out, it would be this. Unfortunately, this year has been so overwhelming on so many fronts that I don’t have a long yarn in me, so I’ll be brief.

If you go back to my earliest posts—and I strongly discourage you from doing so—you’ll see that I didn’t start with much of a plan. I was inspired by the science communication work of folks like Riley Black, Lisa Buckley, Darren Naish, and Mike Taylor, and wanted to give it a try. However, it wasn’t long before I started poking at one subject in particular: the history of paleontology exhibits in museums.

I had been reading reflexive discussions about how art and ethnographic objects were displayed in museums, and saw parallels with the sorts of exhibits I was more familiar with—dinosaurs, mostly. But with the notable exceptions of Paul Brinkman and Rachel Poliquin, few authors were exploring the subject (happily there are several new books on the cultural history of natural history exhibits, including works by Ilja Nieuwland, Lukas Rieppel, and Karen Rader and Victoria Cain). Meanwhile, I found photos like the one below intriguing on a personal level. I recognized the National Museum of Natural History’s collection of dinosaur skeletons, but the arrangement and context were totally unfamiliar. We think of these specimens as unchanging data points in our understanding of past life, but in fact they have transformed repeatedly—they’ve been moved, reposed, and reinterpreted based on changing attitudes in scientific discourse, and sometimes, in response to political and cultural shifts in the world at large. These skeletons have been seen by tens of millions of people, but depending on which decade they visited in, the experience may have been entirely different. 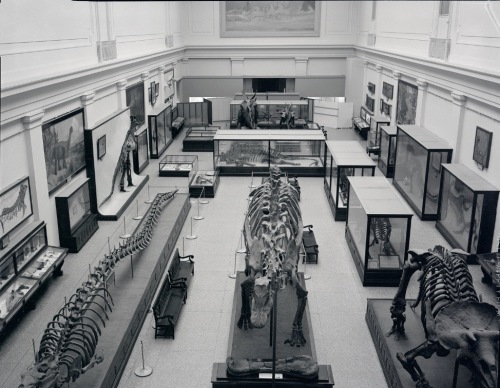 The National Museum of Natural History’s fossil gallery, circa 1940. Photo courtesy of the Smithsonian Institution Archives.

I soon discovered that information about how these exhibits had changed over time was not easy to come by. The stories were hidden away in out-of-print books, old scholarly articles, physical archives, and people’s memories. As I began researching the changing states of American fossil exhibits, it seemed worthwhile to use the platform I had created—this blog—to document the basics. And here we are, ten years later. I am enormously grateful to the archivists, scientists, historians, artists, and others who have shared their expertise and helped me along the way. It is my hope that the 50,000 or so people who stumble upon this site each year find it useful, informative, and (dare I say) eye-opening.

One of the biggest changes from where I was ten years ago is that I’m now on the inside, as it were. Now that I’m creating exhibits, I think my perspective has evolved a bit. In earlier posts, I was quick to criticize exhibits that glossed over certain details, or seemed to cater to the least-interested of visitors. These days, I’m more intrigued by the unique experiences that exhibits can create, and I’m convinced that it’s more important for exhibits to create enthusiasm than knowledge. I may even have to take another look at fossil sandboxes one day. 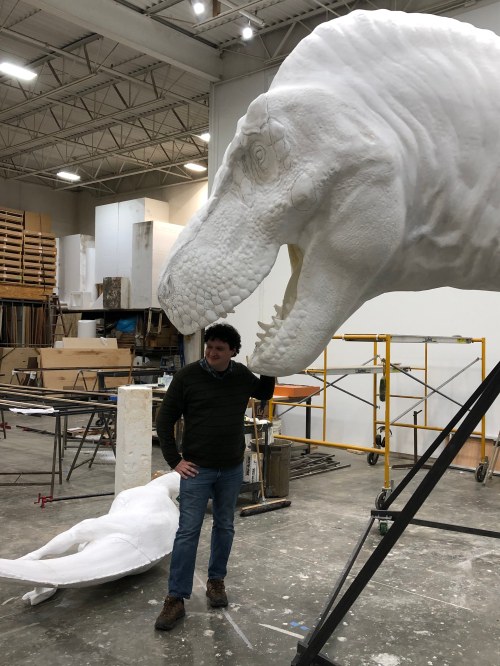 Some nerd with a really big toy—the life-sized model we created for SUE: The T. rex Experience. Photo by Katie Arnold.

Extinct Monsters isn’t going anywhere. I realize that personal blogs have been passé for ages, but I like the format and am sticking with it. There are plenty more stories to explore, so here’s to the next ten years.

The Epistemological Challenge of Model Whales

The Great Mammoth of Lincoln

A 21st Century Hall of Mammals

The Diplodocus Seen ‘Round the World

Installation Art in the Service of Science